In 1985 Hulk Hogan and Macho Man Randy Savage were two of the most popular pro wrestling superstars globally. Hulk Hogan was a household name. He was the current WWF Champion and had defeated the likes of Andre The Giant, Big John Studd, and The Iron Sheik. Macho Man Randy Savage recently made his debut and skyrocketed up the wrestling ladder by winning the Intercontinental Title from fan-favorite Tito Santana. Savage was accompanied by his manager, the lovely Miss Elizabeth. The two combined were pro wrestlings version of Beauty and The Beast. Soon Randy Savage and Hulk Hogan found themselves crossing paths in a champion vs. champion matches. This is the Mega Powers rivalry.

Unfortunately, Savage came up short in most of those encounters but was slowly earning the respect of the fans. At Wrestlemania III, both Hulk Hogan and Randy Savage competed in career-changing matches. Hulk Hogan faced Andre the Giant, and Macho Man Randy Savage competed against Ricky The Dragon Steamboat. Hogan retained the WWF Heavyweight Championship, but once again, Randy Savage did not fare as well, losing the Intercontinental Title to Steamboat. Despite the loss, Savage versus Steamboat is considered by many as one of the greatest matches of all time and earned more respect for Savage.

Months later, Ricky the Dragon Steamboat lost the Intercontinental title to a newcomer by the name of the Honky Tonk Man. Surprisingly after Honky Tonk Man won the championship, he antagonized Savage by calling himself “the greatest Intercontinental champion of all time.” This did not sit well with the Macho Man. He vowed to beat Honky Tonk and reclaim what was his. It was during this time that the once hated Macho Man Randy Savage slowly turned into one of the most popular superstars of all time.

Savage fell to the mat, unconscious. Meanwhile, Elizabeth returned with none other than Hulk Hogan. The WWF champion ran to the ring and chased away Honky Tonk Man and the Hart Foundation. Hulk Hogan had just saved Randy Savage. Macho, dazed and confused, looked around the ring as Elizabeth was telling him what happened. In a moment that can only be described as unbelievable, Hulk Hogan and Randy Savage shook hands, symbolizing the unification of Hulkamania and Macho Madness.

The Mega Powers Were Born

The two superstars were now known as the Mega Powers. Through most of 1988, both Hogan and Savage watched each other’s backs. On one particular episode of Saturday Nights Main Event, Macho Man Randy Savage faced the Million Dollar Man Ted Dibiase, who had recently acquired the services of Andre The Giant from Bobby Heenan. Andre attacked Randy Savage when the referee was knocked out. Elizabeth once again took off to the locker room. Once again, she returned with Hulk Hogan carrying a steel chair. Hulkamania once again saved Macho Madness.

Needless to say, Ted Dibiase and Andre the Giant were not happy. Andre challenged Hulk Hogan to a WWF Heavyweight Championship match on a Friday night edition of the Main Event. At one point in the matchup, Hogan slammed Andre, then went for his signature leg drop but was tripped by the Million Dollar Mans valet Virgil. Hogan went after Virgil but forgot about the Eighth Wonder of the World in the ring. Andre head-butted Hogan, and judo threw him to the mat. Dave Hebner, the referee, made a three count even though Hogans’s shoulders were not on the mat. Andre the Giant was declared the new WWF Champion.

Due to Andre’s contract with Ted Dibiase, Andre gave the title to the Million Dollar Man. The Million Dollar Man Ted Dibiase literally bought the WWF Championship. As chaos ensued, a second referee that resembled Dave Hebner appeared. The referees were twin brothers Dave and Earl Hebner. Ted Dibiase paid off Dave to make the three count. WWF officials declared the title vacant and decided that a Tournament would be held at Wrestlemania IV. Little did we know that Randy Savage and Hulk Hogans saga would become more complex.

The two finalists in the tournament to crown a new WWF champion turned out to be none other than Macho Man Randy Savage and the man who tried to buy the title, The Million Dollar Man, Ted Dibiase. Andre the Giant was once again in DiBiase’s corner, interfering on his employer’s behalf. Randy Savage knew this would not be a fair fight, so he told Miss Elizabeth to go back to the locker room and get the Hulkster. With Hogan in Savage’s corner, the Mega Powers were in full force. The match went back and forth between Savage and Dibiase.

At one point, after an assist by Andre, DiBiase slapped on the Million Dollar Dream on Savage. Previously in the night, it was Ted Dibiase that caused Hulk Hogan to be disqualified. Hogan saw his opportunity and slammed that steel chair on Dibiase’s back as Macho Man was about to pass out. DiBiase fell to the mat in pain. Seeing this, Macho Man climbed the top turnbuckle and hit his famous top rope flying elbow. One, two, three. Macho Man Randy Savage was the new WWF Champion.

That spring, Hulk Hogan took a leave from WWF to work on the upcoming movie No Holds Barred. The new WWF Champion Macho Man Randy Savage continued to wage war with Ted DiBiase. During an interview on WWF Superstars, Andre the Giant and Ted DiBiase attacked Savage. Macho Man knew he had to find a tag team partner. That partner was once again Hulk Hogan. At the inaugural Summerslam, The Mega Powers (Hogan and Savage) challenged the Mega Bucks (Andre and Dibiase). On this night, The Mega Powers were victorious.

The Mega Powers Challenged By The Twin Towers

At the 1989 Royal Rumble, both Mega Powers were in the rumble match. WWF Champion Macho Man Randy Savage and Hulk Hogan seemed to be working as a team. Then Hogan accidentally threw Savage over the top rope when Savage was fighting with Bad News Brown. Savage was livid and got into a shoving match with Hogan in the middle of the ring. Elizabeth was able to patch things up between the two megastars, but fans could tell all was not well in the Mega Powers camp. A month later, on another edition of Saturday Nights Main Event, Randy Savage was thrown out of the ring onto Elizabeth. Elizabeth was hurt. Savage was also injured.

Hulk Hogan knew Savage would be alright, but Elizabeth needed first aid. The Hulkster picked up Elizabeth and carried her back to the first aid area. Once in the first aid area, Elizabeth came to and begged Hogan to go back to the ring to help Randy Savage. Hulk Hogan bolted toward the ring. By this time, Savage had been beaten from one end of the ring to the other. After Big Boss Man missed with a splash, Savage saw his opening and hit an ax handle on the Boss Man. Randy Savage could now make the tag. Hogan reached out his hand, but instead of making the tag, Randy Savage slapped Hogan in the face. He hopped out of the ring, grabbed the WWF title, and left Hulk Hogan to fend for himself.

Hogan did fend for himself, beating the Twin Towers without Macho Mans’s help. After the match, Hulk Hogan went back to check on Elizabeth in the first aid area. Just as soon as Hogan uttered the words “I don’t know what’s wrong with him, he’s crazy, ” Savage made his presence known.  Mach Man Randy Savage confronted Hogan with the iconic phrase, “You have lust in your eyes for Elizabeth.” Signifying the official end to the Mega Powers, Randy Savage hit Hulk Hogan in the face with the WWF title.

At WrestleMania V, the Mega Powers did indeed explode as WWF Champion Macho Man Randy Savage defended his championship against Hulk Hogan. It was a brutal match between the former tag team partners. After the smoke cleared, Hulk Hogan was once again WWF Champion. It seemed as though Hulk Hogan was always one up on Randy Savage. However, the Macho Man wasn’t finished with Hulk Hogan. Macho Man hired a new manager, a sensational manager. Savage now was aligned with Sensational Sherri. Not only did Randy Savage get Sensational Sherri’s managerial services, but he also partnered with someone from Hogan’s Hollywood world.

In the movie, No Holds Barred, Hulk Hogan’s character squares off against a monster named Zeus. Savage knew that Zeus could be the key to ending Hulkamania. At a special event called No Holds Barred The Movie, the team of Macho Man Randy Savage and Zeus faced Hulk Hogan and Brutus the Barber Beefcake. Savage’s team once again came up short.

At Wrestlemania VII, Macho Man Randy Savage competed against the Ultimate Warrior in a career vs career match. In what was the ultimate display of savagery, the match did not disappoint. Both wrestlers gave everything they had. At one point, Savage hit the Ultimate Warrior with several elbow drops, but it still wasn’t enough. Ultimate Warrior pinned the Macho King Randy Savage thus ending his career. Sensational Queen Sherri realized her career was also in jeopardy and began attacking Randy Savage. Suddenly, a familiar face ran through the crowd – Miss Elizabeth threw Sherri out of the ring. 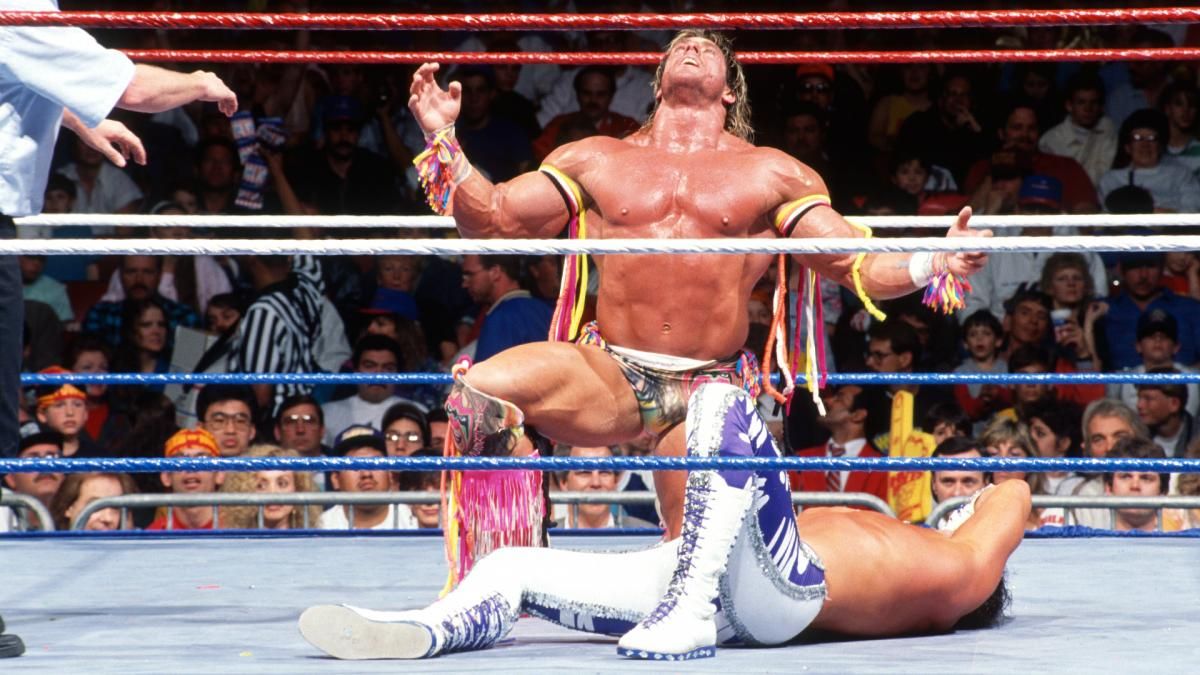