On December 27th, 1998 WCW Starrcade 1998 took place. RetroView fans, we are back with our next trip down WCW memory lane. Today we continue our look at WCW’s biggest event of the year Starrcade and its 1998 variation. This was the night WCW made the somewhat controversial decision to end Goldberg’s undefeated streak in the most dubious of ways.

Also, the Cruiserweight division shines on this show, and Eric Bischoff and Ric Flair have a “match.” The show begins with a fantastic video hyping up the main event of Goldberg versus Kevin Nash for the WCW World Heavyweight Championship.

We are then welcomed to Washington D.C. by Tony Schiavone, Mike Tenay, and Bobby “The Brian” Heenan. Schiavone is quick to proclaim about the main event… “It’s the biggest world title match we have ever witnessed.”

Heenan talks up Nash’s experience but still puts his money on Goldberg, who at this point was 173-0.

Before we get to our first match, Mean Gene Okerlund plugs the WCW hotline and gives us an update that the Horsemen, per Eric Bischoff’s stipulation, have been barred from the building.

Juvi comes out first, representing the Latino World Order. Mysterio comes out second and stomps on an LWO t-shirt to a loud ovation. The champ Kidman comes out last, and this is prime Billy Kidman.

Juvi gives both his opponents a pre-match shove before Kidman and Mysterio hit him with a handful of double team maneuvers. Their teamwork quickly comes to an end when an errand forearm from Mysterio.

All three of these guys are at the top of their game in this one and the action stays fast and furious with numerous counters and high-flying spots. So many cool sequences of moves throughout this match with each man getting a chance to shine. You want to talk about near falls; this match has over 20 by Mike Tenay’s count.

Each man hits an impressive dive onto his opponents during the match with Kidman hitting a shooting star press onto both Mysterio and Guerrera from the top turnbuckle to the outside area.

Eddie Guerrero, the leader of the LWO, makes his way out near the end of the match but his assist to Guerrera backfires and Kidman gets the win with a roll-up.

As Kidman makes his way back to the locker room Eddie begins berating Guerrera and Mysterio in the ring. Guerrero proceeds to challenge Kidman to a Cruiserweight Championship match and Kidman quickly obliges.

Before the bell, Guerrero pounces on Kidman. A vicious power bomb receives a close two count. Mysterio and Guerrera stick around for the match, with Mysterio intervening on Kidman’s behalf when Juvi and Eddie try to use the numbers advantage.

A distraction from Guerrera allows Guerrero to chop block Kidman’s knee. Then, with the crowd chanting “Eddie sucks,” Guerrero begins working on Kidman’s injured leg. Eddie dominates a good portion of this match, but his attempt to go for his patented frog splash leads to a superplex from the tip turnbuckle.

Kidman gets his second victory of the night after an assist from Mysterio leads to another shooting star press. Two great matches featuring four of the greatest cruiserweights ever to start off this show.

Next up we get another video package hyping up the main event before the next match of the night.

Norman Smiley, one of WCW’s underrated comedy acts of the late ’90s versus an underrated Iaukea. Smiley controls the early portion of the match with some hard slaps but is soon met with a pair of drop kicks from Iaukea.

The announcers have really no interest in this match, their commentary focusing entirely on the drama between Bischoff and Flair. Smiley displays his vast array of submission holds throughout this match and eventually gets the win with a rear-naked choke.

Scott Hall slowly makes his way to the ring sporting his original Outsiders t-shirt. His “Hey yo” greeting is met with a loud cheer from the Washington audience. Hall talks about his personal and professional struggles of 1998 and how his old friend Kevin Nash was in the main event.

He also mentions he has nothing to prove to anybody. Before the next match we get a recap video of Bam Bam Bigelow beating down Scott Hall in the backstage area on Monday Nitro followed by the three-way match between Nash, Bigelow and Goldberg.

Sonny Onoo brings out Ernest Miller to a chorus of boos. Post Raven’s Flock Saturn comes out next and this was a weird time of his WCW run. Miller gets on the mic and offers Saturn five seconds to leave. Saturn ignores the offer and lands a hard right hand.

This match consists of a lot of Miller taunting and dancing around along with Saturn ground and pound. Late in the match, Onno’s interference backfires, leading to a picture-perfect Death Valley Driver from Saturn for the win.

Mean Gene is at the entrance way, and he welcomes out Ric Flair for an interview. Flair comes out in a sparkling silver and black robe. The Nature Boy talks about being on his own tonight and beating the crap out of Bischoff.

Flair’s interview is followed by a video recapping the nWo’s ascension, eventually leading to the Flair and Bischoff feud.

The nWo black and white make their first appearance of the night. Man, the nWo storyline was so watered down by the end of 1998. Finlay and Lynn are the definition of a rag tag team randomly thrown together.

This is the definition of a bathroom break match as the live crowd gives no reaction throughout. It is cool seeing Norton and Finlay just beat the living crap out of each other though. Finally, Norton gets the W for the nWo black and white with a vicious power bomb on Jerry Flynn.

Mean Gene is joined this time by Eric Bischoff and we get our usual pompous Bischoff promo. As with the nWo story being watered down, Bischoff was just go away obnoxious by this point.

Once again, Peacock dubbing in “Break the Walls Down” for Jericho’s entrance is just obnoxious. Jericho comes out with Ralphus by his side, complete with a replica TV Championship. Konnan comes out next, man was he over in 1998 as part of the nWo Wolfpack.

Starting the match with a furious frenzy, Konnan takes control early. The momentum switches when the match spills outside the ring as Jericho sends Konnan flying into the steel guard rail. Good chemistry best describes this match as Mike Tenay makes reference to their time wrestling in Mexico.

Late in the match Jericho blocks a face buster before attempting to apply the Lion Tamer. After an accidental ref bump, Jericho hits Konnan with the championship belt, but the nWo Wolfpack member kicks out at two. Jericho’s facial expression is solid gold when Konnan kicks out.

Eventually, Konnan locks Jericho in the Tequila Sunrise and forces Jericho to submit.

We cut to the back where the Giant is being interviewed for the WCW website by Lee Marshall. A reference to DDP getting up from the Giant’s chokeslam leads to Marshall being verbally berated and threatened by the Giant before the big man storms off in anger.

Bischoff enters first, and the crowd barely reacts. Flair, on the other hand, as always gets a boisterous ovation. The Nature Boy wastes no time as he sprints to the ring, sending Bischoff scrambling ringside.

A pair of knife-edge chops begins the match outside the ring before both men step between the ropes. An enraged Flair tortures Bischoff with various holds and strikes. Bischoff gains the advantage somehow, and even busts open Flair’s forehead, but a perfectly timed low blow swings the momentum back into Flair’s favor.

Flair’s rage inadvertently takes out the referee before the Dirtiest Player in the game kicks a prone Bischoff right between the legs. A figure four looks to have the victory sealed for Flair, but Curt Hennig makes his way down to ringside and provides Bischoff with a foreign object. One strike with the object later, and Bischoff is the winner. Talk about anticlimactic.

A video package highlighting the Giant – Diamond Dallas Page rivalry comes next. Included in the video is Bret Hart winning the United States Championship from Page; weird that Hart isn’t on this show. Just another case where WCW had no idea how to use the Hitman.

The nWo black and white’s biggest member slowly makes his way to the ring. Once again, the audience is fairly laid back with their reaction. Diamond Dallas Page, much like Flair before him, receives a hero’s welcome. Page starts fast and furious, hitting and running, avoiding the Giant’s punch attempts.

When the fight spills to the outside is when the Giant takes control with a head butt that sends Page over the steel guard rail into the crowd. Then, the Giant focuses his attack on DDP’s arms, slamming his shoulder into the steel ring post multiple times.

Back in the ring the Giant continues his methodical attempt to wear down Page. DDP as always plays the hero in peril better than most, so when his comeback begins the crowd is fully invested.

The Giant looks to have the match won following a bear hug and power slam, but pulls Page up at a two count. Over confidence and the errant swing of a chair by Bret Hart leads to the Giant’s downfall. The finish is fantastic.

The Giant, with his hand around Page’s throat, looks to chokeslam Page from the top turnbuckle, but Page counters it into an impressive Diamond Cutter.

One last video package leads us to the night’s main event, where Michael Buffer is ready to ring in the contest as only he can.

The crowd is fully amped up for this match, greeting both wrestlers with raucous ovations. Kevin Nash, the challenger, enters first, casually strutting his way to the ring full of swagger. The “Goldberg” chant erupts through the crowd as “Da Man” is shown leaving his locker room, security in tow.

A great pre-match stare-down ensues. Nash raises his hands with the Wolfpack gesture and Goldberg responds raising his arms and the crowd erupts. Nash starts the match with a side headlock but Goldberg powers his way out with a backdrop suplex.

The power move sends Nash reeling to the outside. Once back in the ring, Nash takes control with his usual offensive attack. Goldberg powers his way out of being choked by Nash’s boot in the corner, something that shocks Schiavone.

Nash surprisingly breaks out an arm bar that Goldberg counters into a leg lock. The surprising display of trading submission surprises the commentary trio. Goldberg ducks under a big boot and hits Nash with a spear.

Nash avoids the jackhammer by hitting Goldberg with a low blow, taking full advantage of the no disqualification stipulation. Both men trade power moves and near falls as the intensity rises. This is where the nonsense begins. First, outcomes Disco Inferno in a nWo Wolfpack shirt.

Goldberg quickly dispatches him. Then Bam Bam Bigelow comes out, and he’s sent reeling by Goldberg. Then, with the referee distracted, Scott Hall, dressed as a security guard, jabs Goldberg with a cattle prod, complete with over-the-top electric sound. 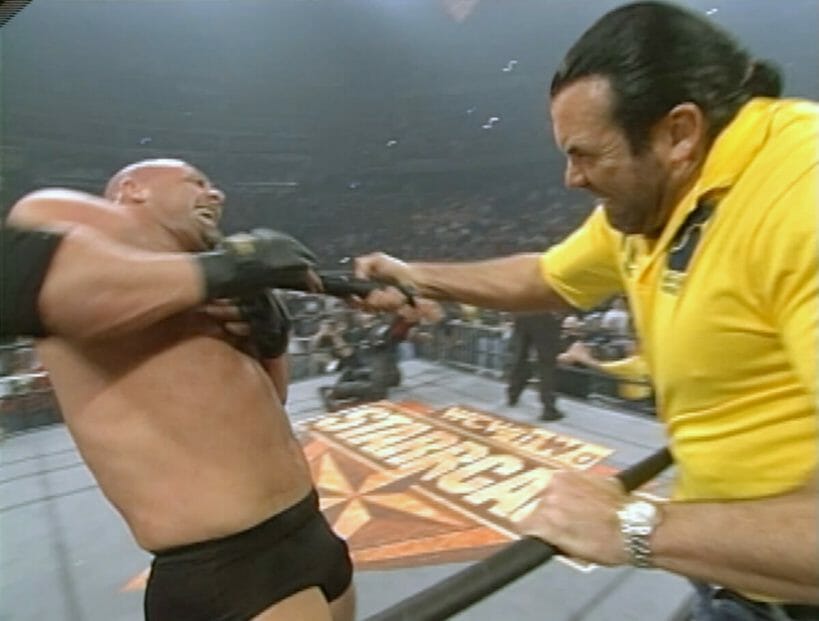 With Goldberg literally stunned, Nash hits the jackknife power bomb for the 1-2-3 and the streak is officially dead.

What a dubious ending to the streak only made even worse with the following night’s Nitro and the finger poke of doom. The ending of Goldberg’s streak, followed by Hogan winning the title once again the following night, were two of the key catalysts for the fall of WCW.

Next time we’ll go back deep into the WCW vault for an older Starrcade event.