The stars of the NJPW LA Dojo roll into week three of this year’s Fighting Spirit Unleashed series with our NJPW STRONG Synopsis for 9/24/22. This week’s episode features a whopping four matches from the tapings at The Vermont Hollywood. We will see the likes of QT Marshall, TMDK, and IWGP Junior Heavyweight Champion Taiji Ishimori in action. With such an exciting show lined up, let’s not waste any more time and get right into the NJPW STRONG Synopsis.

QT Marshall has gained little respect for the young lions of the LA Dojo through his various visit. By all rights, he should respect the dojo, as his last outing in a NJPW STRONG ring ended in a pinfall loss to Karl Fredericks at Collision.

More recently, his Factory proteges Aaron Solow and Nick Comoroto were victims of an upset victory by the unlikely pairing of Yuya Uemura and “The Fallen Angel” Christopher Daniels. To put it bluntly, QT Marshall’s reputation in NJPW STRONG is in jeopardy. Across from him, this Saturday night is the up-and-coming Keita.

The last time we saw Keita in NJPW STRONG was at Mutiny, teaming with Yuya Uemura to defeat Kevin Blackwood and Lucas Riley. While Keita fights for the honor of the LA Dojo, QT Marshall may be looking to make an example of him to get back at Keita’s former partner Yuya Uemura.

Christopher Daniels and Yuya Uemura were shaping up to be the Cinderella Story of the NJPW STRONG Openweight Tag Team Championship Tournament. Coming together after Daniels’s original partner Karl Fredericks got injured, the odd couple pairing toppled The Factory and The Mighty Don’t Kneel before falling to Aussie Open in the finals.

This Saturday night, Daniels and Uemura have a rematch against their semifinal opponents TMDK. Following their loss, TMDK’s Shane Haste vowed to tie up all the loose ends from their tournament run. However, the man who teamed with Shane Haste throughout the tournament, Mikey Nicholls, is not in Hollywood.

Instead, Shane Haste will team with Bad Dude Tito. Haste and Tito have been on a roll in the Burning Spirit series in Japan along with JONAH. If they can carry that momentum into The Vermont Hollywood, they might just find themselves at the front of the line for a shot at the NJPW STRONG Openweight Tag Team Champions, Aussie Open. 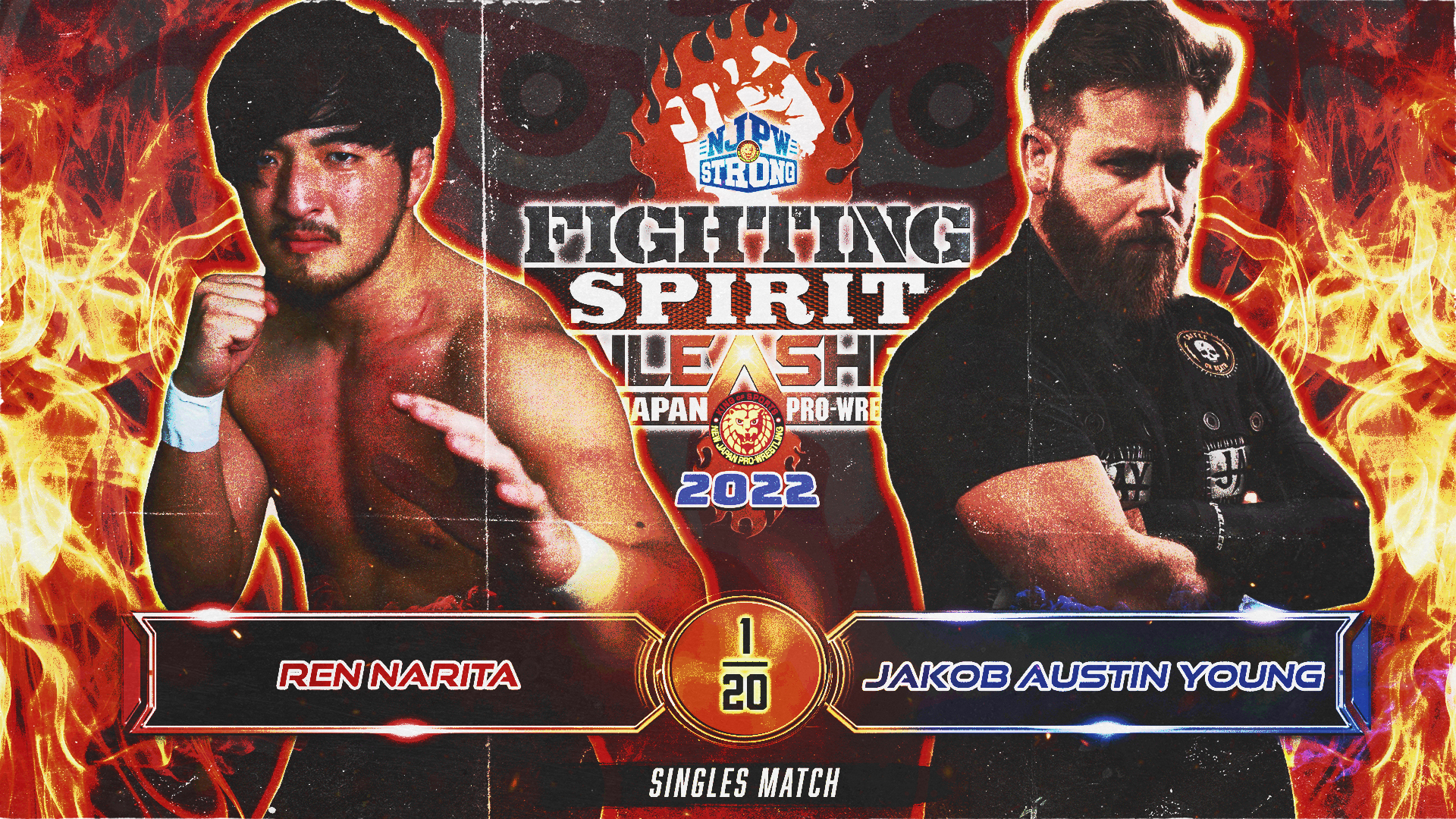 However, he’ll have quite the challenge in Ren Narita, one of the finest Young Lions. Ren Narita joined the NJPW LA Dojo as part of the NJPW excursion program. A full year after he came to America, it seems his time with the American lions is nearing its end. This Saturday, Narita has another chance to prove himself against J.A.Y. 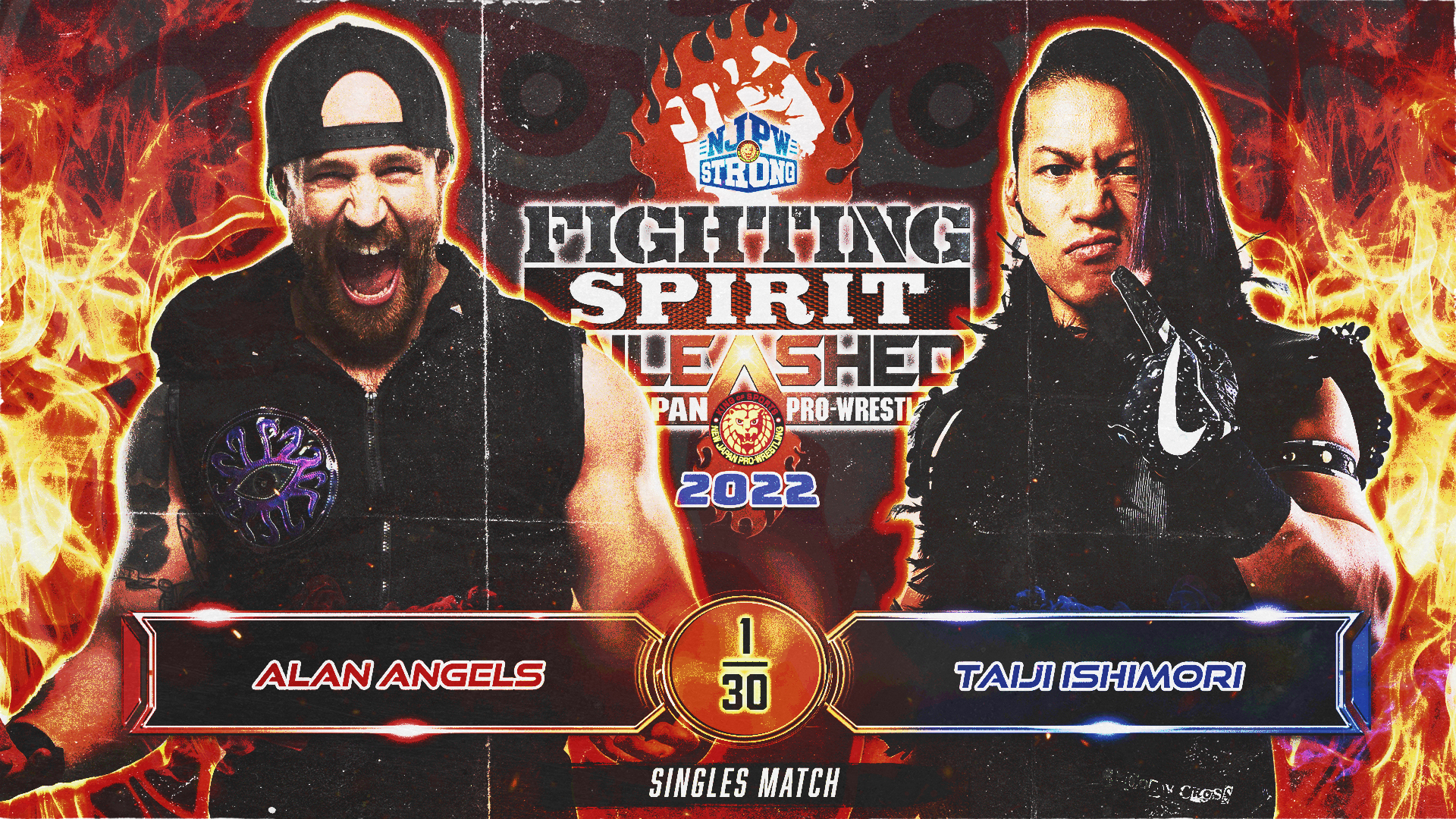 “The Bone Soldier” captured the Junior Heavyweight strap back in May and hasn’t defended it since late June. Under IWGP rules, Taiji Ishimori has to defend his championship before November, or he will relinquish the title back to the IWGP. Ishimori claims he’s waiting for the right opponent, but time is running out. According to Ishimori, he wants an opponent with everything to prove. Could AEW’s Alan Angels be that man?

Alan Angels debuted in NJPW along with fellow Dark Order member Evil Uno in the NJPW STONG Openweight Tag Team Championship Tournament. However, Evil Uno and the former Five lost to eventual winners Aussie Open in the first round.

Angels has come back to NJPW STRONG with an eye to correct his record, and who better to do that with than a reigning champion? A win over the IWGP Junior Heavyweight Champion would be the biggest win of his career so far, and also a ticket to the biggest match of his young career. Will he be the man to knock off the Bone Soldier? Find out in the main event of this week’s NJPW STRONG.

Please share with us what you expect to happen on this week’s edition of NJPW STRONG in the comment section below.

Stay tuned to Pro Wrestling Post for this and additional stories from the wrestling world. Readers can rely on Pro Wrestling Post to be their daily source for all things inside the squared circle. As a result, readers can expect daily news, history, and much more. Please visit New Japan Pro Wrestling’s site here for news and information on the promotion and upcoming events pertaining to the NJPW Strong program and FITE TV’s official website to watch for International viewers.