Most wrestling fans have heard the name Jushin Thunder Liger. He’s a certified legend and Hall of Famer known the world over. His wrestling career spanned over 35 years and well over 3,000 recorded matches. But what might not be known is the story of Jushin Liger’s alter ego, Kishin Liger. And today, we revisit the day that the monster debuted. 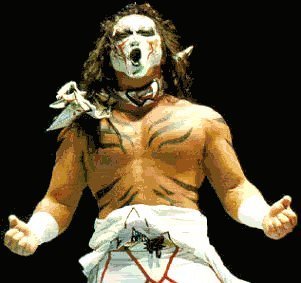 A bit of background

The wrestler Jushin Liger is based on a 1990s anime of the same name. The word ‘Jushin’ roughly translates as ‘Beast God’, and ‘Thunder’ is his final form. The wrestling character Jushin Liger has had more or less the same personality for decades. For the most part he was an honorable warrior that fought valiantly in the ring who also happened to look like a superhero.

And there were also a few cases when he wrestled arrogantly or mocked his opponent. But Keiichi Yamada, the man behind the Liger gimmick, had two special ‘personas’ saved for rare occasions.

The first one was called ‘Battle Liger,’ and it was saved for Liger’s matches with heavyweights. Since Liger was a junior heavyweight, he didn’t face bigger opponents often. So when he did, he commemorated those rare occasions with a special look. Usually, it saw him appear shirtless instead of with his full-body attire and with a special mask.

But even with this special look, Liger still wrestled more or less the same. It wasn’t until he took on a specific heavyweight that he needed to do something completely different.

The Great Muta is quite possibly the most famous Japanese wrestler in North America aside from Liger himself. Muta was the gimmicked alter-ego of a wrestler named Keiji Muto. Muta was something akin to a cross between The Undertaker and Mankind. He possessed ‘Taker’s supernatural aura and Mankind’s unpredictability and savagery. He was also prone to fighting dirty and using the most dangerous weapons available when wrestling.

So when New Japan booked Liger to face Muta on October 20th, 1996, it was something completely new. Liger, a technical wrestling babyface, had never faced such an opponent before. He knew nothing of Muta’s violence, bizarre behavior, or propensity for bloodletting. When Liger tried wrestling normally, nothing happened. Muta brushed him off and didn’t seem fazed at all. Muta spent more time wandering around the ring scaring fans than he did actually fighting.

But over time, Muta started beating the crap out of Jyushin Liger. He hit way harder because he was much stronger and more vicious. Liger’s speed and technique advantages meant nothing to Muta. And when Muta started using weapons like a chair and a broom, Liger found himself in serious trouble. It seemed like he was guaranteed to lose for coming to this match unprepared.

Except he wasn’t unprepared; on the contrary, he had a big surprise waiting for him. Muta ripped Liger’s mask off to get the crowd going. They loved Liger and they knew that desecrating his sacred mask was a horrible thing to do. But Muta didn’t care. He wanted to beat Liger and humiliate him. but when Muta went to grab another weapon, he returned to the ring and saw something no one had ever seen before.

There, standing in front of him, was Liger. His mask was hanging off by the side of his head, like a botched decapitation job. And staring at Muta was Liger’s real face. It was painted black and white to match the special attire he brought for this match. Liger looked like the wrestling version of one of the KISS guys.

But this wasn’t the same Liger as before. This new Liger spit green mist in Muta’s face just as Muta had done earlier. Then he howled like a beast and ripped off most of his ring gear to reveal demonic marking all across his chest. This was something new. This was something monstrous.

This was Kishin Liger.

Kishin did things Jushin had never done: he tried to bust Muta open, he cracked Muta’s head with a chair, and he tried to stab Muta with a ring spike. Kishin was willing to go to the most extreme lengths to win. Muta had insulted Jushin Liger so badly that he awakened a veritable monster the likes of which New Japan had never seen before.

But even though Kishin fought like Muta, Muta was better. Muta was already a master at this more unchained and violent style. So even though Kishin’s debut caught him way off guard, he wasn’t going to lose. Kishin’s aggression blinded him so much that he gave Muta the opening he needed.

The Debut of Kishin Liger

As Kishin rushed to a corner to stab Muta with a ring spike, Muta dodged. The ring spike ended up caught in the table setup behind Muta, and Liger found himself without a weapon. Then Kishin turned around and got a face full of red mist from Muta. Kishin was blinded just as Muta was before. But this time, Muta would string together enough offense to put Liger down for the three-count.

This match ended up being one of the most iconic of both Muta’s and Liger’s careers. It gave a new dimension to Liger’s character and allowed him to show more personality than his mask allowed. It sold the idea that Muta was dangerous, but Liger was willing to fight fire with fire to win. And it allowed Liger to have more exciting and personal feuds with other wrestlers.

Kishin Liger would only appear three more times. First in 2006 with a feud with Bad Boy Hido after Hido cut some of Liger’s hair. Then again, in 2012 when TAICHI tore Liger’s mask to pieces. Kishin’s final appearance is his second-most famous, aside from his debut. After Minoru Suzuki copied TAICHI and desecrated Liger’s mask, Kishin appeared and scared Suzuki deeply, which was something few people, if anyone at all, has been able to do.

If all of this sounds like a compelling story to you, then you’re in luck. A video of Kishin’s debut and the match around it can be found below. It’s very entertaining, especially considering how unexpected it is seeing Jushin Liger wrestling like a ‘real’ demon.