On Sunday, August 8th, the world lost James ‘ Kamala ‘ Harris. For fans of wrestling, today may not recall who he was but a simple image of the man is unforgettable. Often managed by his ‘handler’ Kim Chee, Kamala was a notable competitor in the 1980s and into the 90s. He competed across the world but gained the most notoriety in promotions such as the WWE, AWA, Mid-South Wrestling, and WCW. Kamala competed in a remarkable four different decades. His career ended in 2010.

Throughout his career, Kamala was never known for wrestling in highly technical matches. There was never any need. He was thoroughly entertaining. Often taking the role of a simpleton or simply unaware, Kamala was able to be both a heel and face. Fans felt angry when he would lay havoc on fan favorites and have empathy for him when he faced ridicule. His early life his family faced poverty. As he recalls his upbringing the Memphis, Tennesse native’s family struggled to make ends meet.

Memphis is where we do our shopping and everything, so I’m there just about every day I’m not on the road. We were a real poor family. We were like sharecroppers, picking cotton, chopping cotton, that’s how we survived. – James ‘Kamala’ Harris

It was after leaving home that he met legendary wrestler Bobo Brazil at the age of 25. Harris debuted under the moniker and name unlike what fans had become accustomed to. It was the name “Sugar Bear” Harris that he first began to compete under. After a series of name changes early on was fitting in someone discovering a name that would best fit who he was. Whether it was “Ugly Bear” Harris, “Big” Jim Harris, or The Mississippi Mauler, James Harris was trying to find himself.

Kamala’s origins aren’t attributed to Harris but actually another WWE Hall of Famer and a legend in Memphis Wrestling.

The Kamala character was created by Jerry Lawler. I kept it hidden for a long time because I like being creative myself, but Jerry Lawler, I give him the credit for it. I was living in London and when I moved back to Memphis, I had all my belongings coming by boat because I had so much – all my wrestling gear and everything and I wasn’t looking to go back into wrestling when I came back here because my ankle was broken, it had to heal. 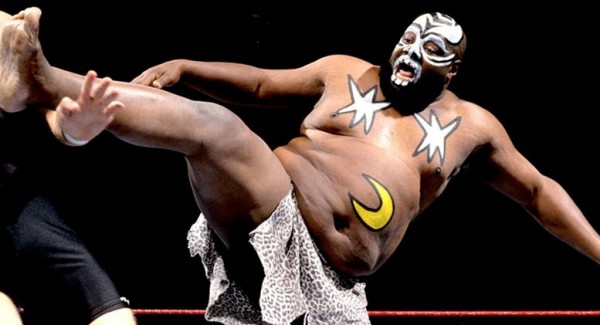 After a while, it was taking so long for my stuff to get here, so I went to Memphis to see a friend of mine, the late Dream Machine, because he could always get a hold of wrestling gear. So I went to see him and that’s when I ran up on Lawler and the local promoter, Jerry Jarrett, and they asked me if I’d do a gimmick for them. I said, “Yeah, I’d be glad to, but my ankle is broke.” They asked me to leave because they didn’t want the fans to see me. I went home, they called me that Wednesday and that’s when we put together the Kamala gimmick. I’ve got to give 99 percent of the credit to Jerry Lawler. – James ‘Kamala’ Harris

While today some may question whether or not the gimmick would be socially acceptable, for Harris it didn’t matter. He enjoyed performing as Kamala and fans wanted to see him as this character. By his own admission, it was a highly successful character. In today’s day and age when a performer is often seeking to reinvent themselves, Kamala didn’t need to.  He had the opportunity to compete with the likes of Andre the Giant, Hulk Hogan, and had a program with The Undertaker.

For all of the success the character had, he didn’t earn what the character deserved. After parting ways from the WWE in 1993, Harris resumed his work as a truck driver. This was until WCW came calling in 1995. It was during this time when Kamala joined Kevin Sullivan’s Dungeon of Doom. The character once again had a home. It was a fitting place for the Ugandan Giant.

Kamala | Legacy of The Ugandan Giant

After departing WCW in 1995, his career was met with sporadic appearances until retiring in 2010. In looking into the legacy of the Ugandan Giant, readers should know (if they already don’t) that he had a heart of gold. He raised his niece and fought for the retribution of his sister’s killers. His skills go beyond wrestling. Harris was a talented musician and co-wrote his autobiography.

He faced tough times later in life losing both of his legs to diabetes. Kamala was a main event talent that wasn’t paid as such. It was a shame to know someone that generated as much money and attention for an industry, had little to nothing to show for it. Fans of the Ugandan giant are encouraged to relive some of his memorable matches and moments throughout his career. Whether it was a feud with Sgt Slaughter, Hulk Hogan, long-time rival Jerry ‘The King’ Lawler, or The Undertaker, Kamala was a memorable character in wrestling’s lore and one fans won’t soon forget. Rest in Peace, Kamala, and the Legacy of the Ugandan Giant.