It is time for AEW Double or Nothing 2022! All Elite Wrestling is finally back in Las Vegas after a long three-year absence. We have four titles on the line. We even have the first-ever Owen Hart Foundation Tournament finals! And I am very excited because I will be there to see it in person! Let us look at what should be a truly fun night in Las Vegas!

The dream tag team is finally happening! After weeks of trying to gain his friendship, Danhausen succeeded in getting the most unlikely alliance with the usually reserved Hook. Can these two opposites really work together on Sunday night?

The opponents on Sunday are also an unlikely team. Tony Nese and his manager Mark Sterling. While Nese is a well-known talent in the ring, Sterling is not. Will this put their team at a huge disadvantage? All we know is that someone will likely be cursed on Sunday night during this match. 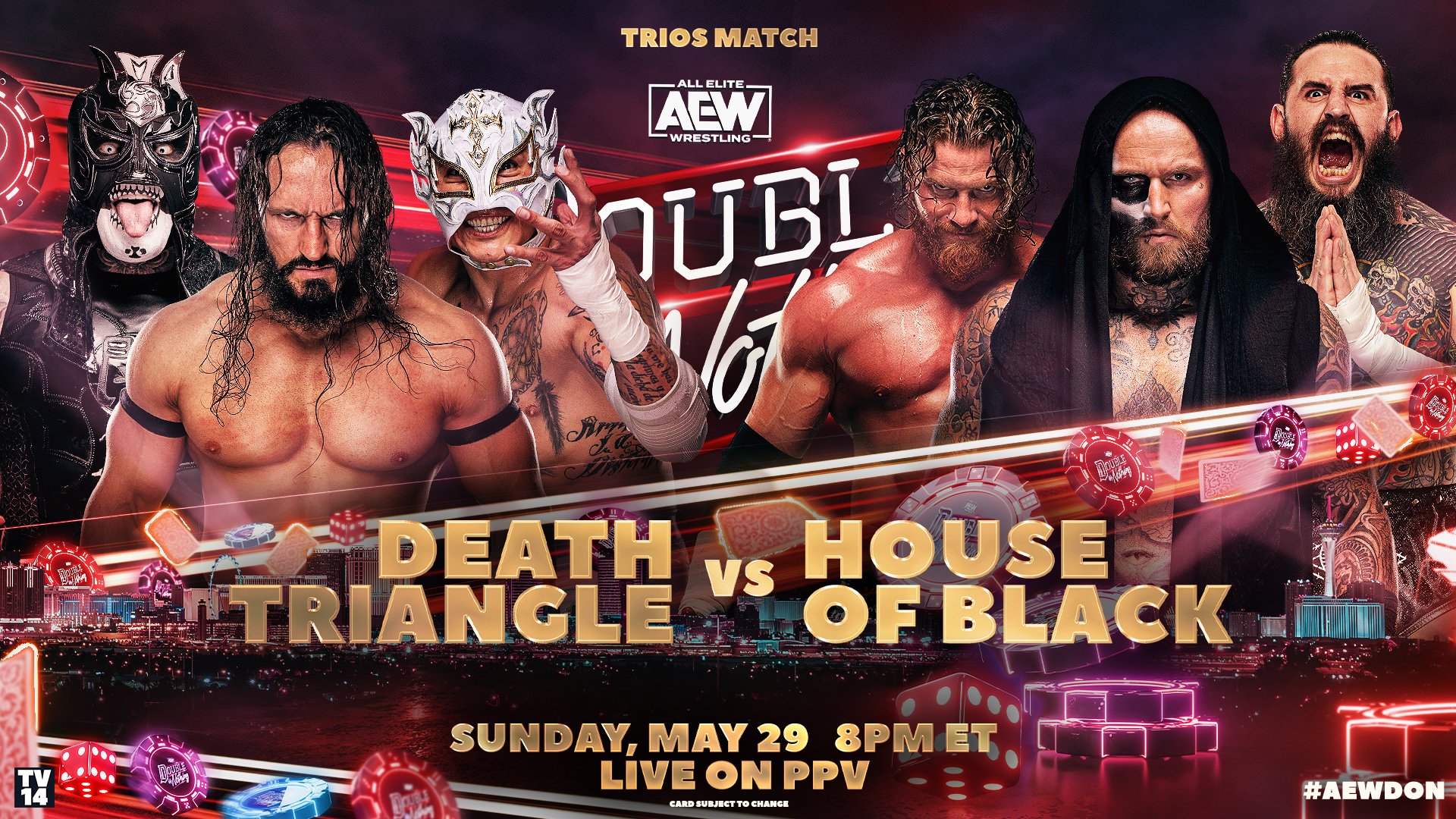 This feud has been building for going for a long time. The House of Black has been terrorizing the AEW roster for months. The only team that has constantly tried to stand in their way is Death Triangle. The problem is Death Triangle hasn’t been at full strength during this very personal feud. That is until now.

Rey Fenix is the wildcard in this match. He hasn’t had as many in-ring opportunities against House of Black. Will he be the deciding factor on Sunday night? All we know is this will be a fun match between six talented competitors. AEW Double or Nothing 2022
Kyle O’Reilly vs. Darby Allin

This late addition to the card has a brief but brutal backstory. Two weeks ago on AEW Dynamite, Kyle O’Reilly viciously attacked the leg of pro wrestling legend Sting. Sting will not be able to compete at AEW Double or Nothing. But his risk taking partner, Darby Allin is ready for action.

This is an intriguing match. Kyle O’Reilly is certainly known for his technical skill. However, he just lost a very physical match to Samoa Joe on Wednesday night.  Will he possibly be recovered? We know Allin will be willing to put his body on the line to defend his tag team partner.

Jade Cargill has been dominating the AEW Women’s Division since debuting in November of 2020. All Elite Wrestling has been pushing the undefeated streak of Cargill for months now. Who can possibly be the one to dethrone the unstoppable AEW TBS Champion?

Anna Jay is an interesting choice. Jay has been building her resume on AEW Dark and Dark: Elevation with many victories. But it is quite a step up to face Cargill on the huge pay-per-view stage. Can Anna Jay pull off the seemingly impossible?

The fight over the TNT Champion has been an odd one in recent months. It involved the hated America’s Top Team versus the equally reviled Sammy Guevara and Tay Conti. With the TNT Championship repeatedly changing hands in the past few months, who has the upper hand in this bizarre feud?

On Sunday night,  we have a unique six person mixed match. The wild card is surely MMA star Paige VanZant in her pro wrestling in-ring debut. Will she impress on Sunday night in Las Vegas? And more importantly, will the crowd just boo all six competitors all match long? 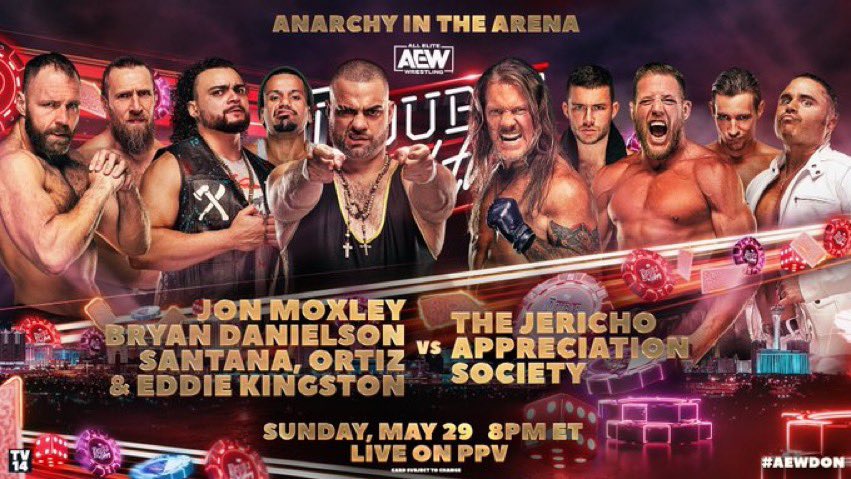 Chris Jericho formed the Jericho Appreciation Society is tribute to himself. He did so to also get revenge on Eddie Kingston and betrayed his former Inner Circle friends, Santana and Ortiz in the process. The numbers advantage has been too much for Kingston, Santana and Ortiz to handle in the past few weeks. That is until the Blackpool Combat Club arrived.

The Blackpool Combat Club has quickly become one of the most popular acts in all of AEW. Bryan Danielson and Jon Moxley will join Kingston, Santana and Ortiz on Sunday night. It will be an Anarchy in the Arena match. What exactly does that mean? It is hard to say but we know it will be fun and very chaotic. 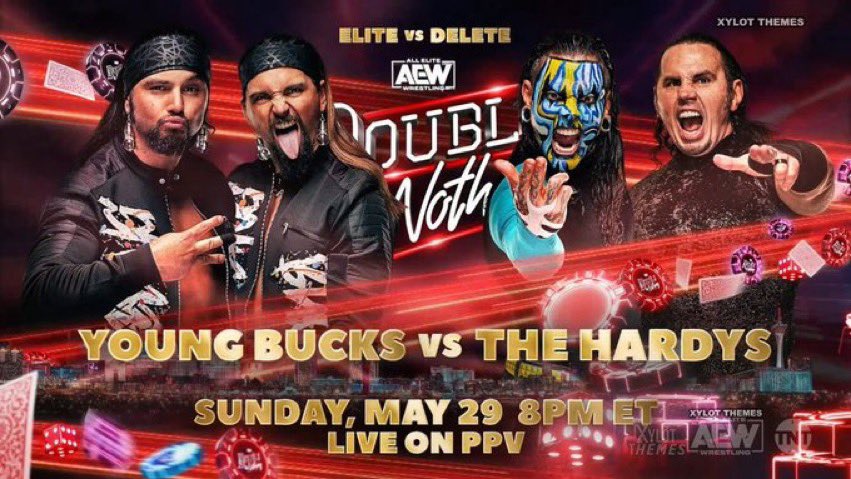 The Hardys vs. The Young Bucks

The “dream match” comes to Las Vegas. Two of the arguably best tag teams in pro wrestling history will face off at Double or Nothing. While this isn’t the first match between these four, it is arguably the biggest stage they have faced each other at so far.

We know the two teams will pull out all the stops to defeat one another. Both teams are also running the risk of losing momentum in the loaded tag team division. This could certainly steal the show on Sunday night. 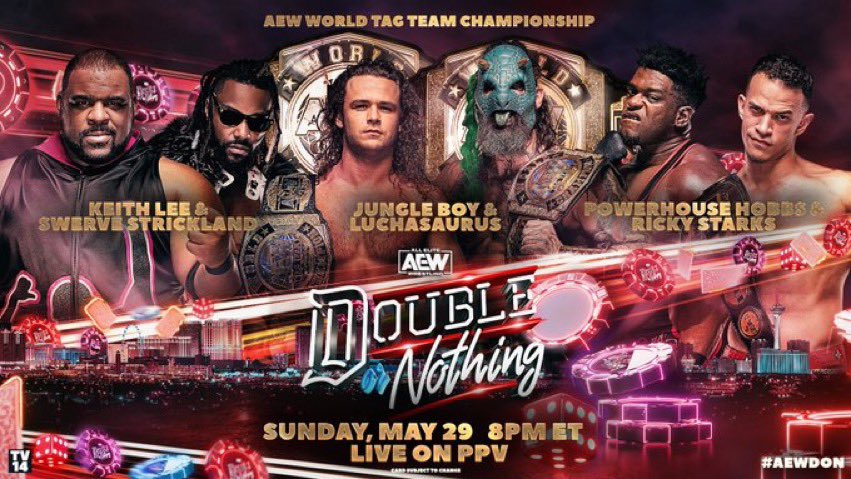 It should be chaotic fun for the AEW Tag Team Championship. Jungle Boy and Luchasaurus won the title on the very first AEW Dynamite of 2022. The have defended the title against all comers this year. How will they handled two new talented teams in Las Vegas?

Team Taz has been feuding with Keith Lee & Swerve Strickland for months now. Will they be focused on each other in this huge tag team match? If they do, Jungle Boy & Luchasaurus might just find a way to retain yet again.

At St. Patrick’s Day Slam 2022, Thunder Rosa finally did it! She won the AEW Women’s World Championship title. While she defeated Nyla Rose at Battle of the Belts, Rosa really hasn’t had a meaningful feud for her title. That is until this Sunday at AEW Double or Nothing.

Her opponent is the dangerous Serena Deeb. Deeb has been terrorizing the AEW Women’s Division for months now. Her technical style is unlike anything Rosa has faced up to this point. Will she be ready for Deeb? But with the disrespect Deeb has shown in recent weeks, it seems unlikely Thunder Rosa will be overlooking her opponent.

At AEW Grand Slam, Ruby Soho suffered a heartbreaking loss to Brit Baker for the AEW Women’s World Title. For that point on, Soho has been seemingly lost in the shuffle for months. She can change her narrative at Double or Nothing.

The first ever Women’s Owen Hart Foundation Tournament Final will be on Sunday night in Las Vegas. Can Soho get her redemption and win this prestigious tournament? Or will Baker prove to be her downfall yet again? It will be an intriguing match-up on a stacked card. The Men’s final of the Owen Hart Foundation Tournament is a huge one. Adam Cole has been one of the best competitors in all of AEW. Other than his heartbreaking losses to the AEW World Champion Hangman Page, Cole has been nearly unstoppable. Can he become the first ever Men’s winner of this huge tournament?

He is facing a daunting challenge in Ring of Honor Television Champion Samoa Joe. Joe has dominating all comers since his debut in early April. It will be a physical battle against Adam Cole. Let us hope that we will get a clean finish on Sunday night in this highly anticipated matchup. AEW Double or Nothing 2022
MJF vs. Wardlow

Arguably the best feud heading into AEW Double or Nothing is between MJF and Wardlow. Wardlow had been the hired enforcer for MJF since the very beginnings of AEW. It has been wonderful to watch Wardlow become more and more popular in recent months. The moment he turned on MJF at AEW Revolution was one of the biggest in AEW History.

Since that moment, MJF has made Wardlow’s life a living hell. He has stripped him of his music, placed him in handcuffs before every match and demeaned him in every way possible. Wardlow had to go through ten lashes and a cage match with Shawn Spears to get to this match in Las Vegas.

The stipulations are clear. If Wardlow wins, he gets an AEW contract.  If MJF wins, Wardlow cannot sign with AEW. The momentum seems to be on Wardlow’s side but does MJF have one last trick up his sleeve? It will fun to find out on Sunday night. 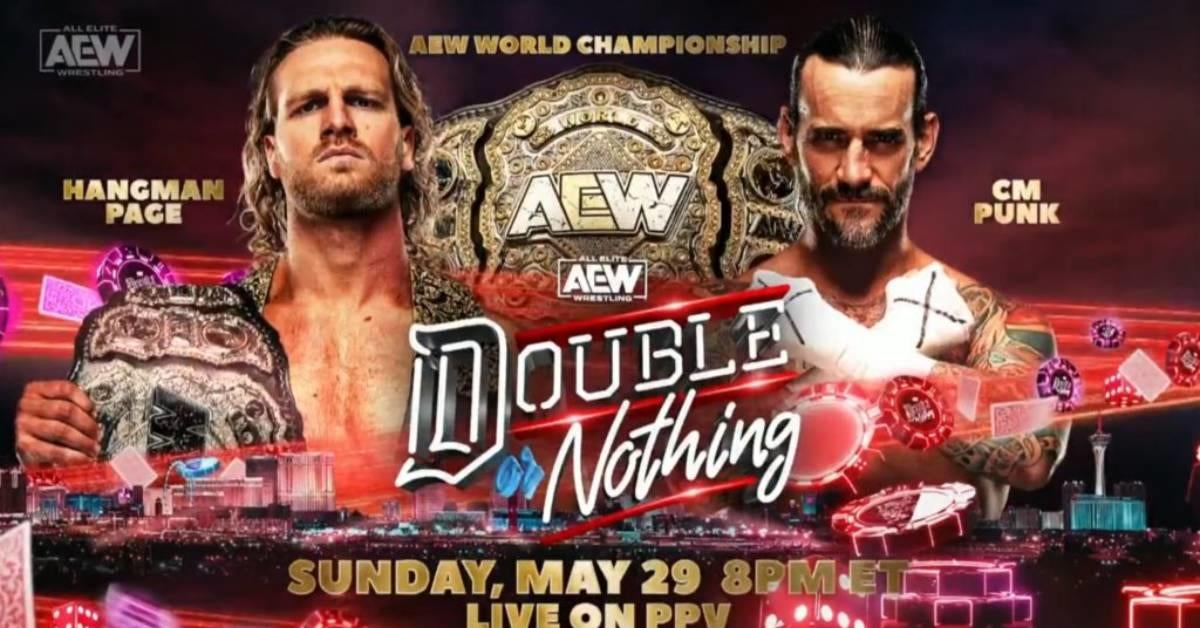 The main event is a huge one in Las Vegas. Hangman Page winning the AEW World Champion was one of the best storylines in AEW’s short history. He has defended the title well against Bryan Danielson, Lance Archer and Adam Cole. But he faces his biggest challenge to date in CM Punk.

CM Punk has fought all challengers since debuting in August 2021. His lone singles loss was to MJF under dubious circumstances. He seems primed to win the biggest prize in All Elite Wrestling.

The mindset of the two competitors is certainly interesting. CM Punk constantly talks about respecting Page. Page is having none of Punk’s respect and vowed to destroy CM Punk on Sunday night. This match is becoming personal in a hurry and a true tossup. The outcome will change the course of AEW for the summer to come. I cannot wait to see it in Las Vegas live in person.

Stay tuned to Pro Wrestling Post for this and additional stories from the wrestling world. Readers can rely on Pro Wrestling Post to be their daily source for all things inside the squared circle. As a result, readers can expect daily news, history, and so much more. Please visit All Elite Wrestling’s official website here for news and information on the promotion and upcoming events and FITE TV’s official website to watch AEW Dynamite and Rampage here for International viewers.