On April 7th & 8th, the WWE’s NXT brand presents NXT TakeOver Stand & Deliver. For the first time, an NXT TakeOver is being held over two days. The number of matches slated to take place makes sense to hold it over two days. A TakeOver will typically have about five matches over a period of two to two and a half hours. This time around, there are as many as eight matches already booked. Championship matches, gauntlet matches, unsanctioned matches, and title unification matches are all on tap for this event. This preview will highlight each of the matches for both nights and what fans can anticipate. Here is NXT TakeOver Stand & Deliver. 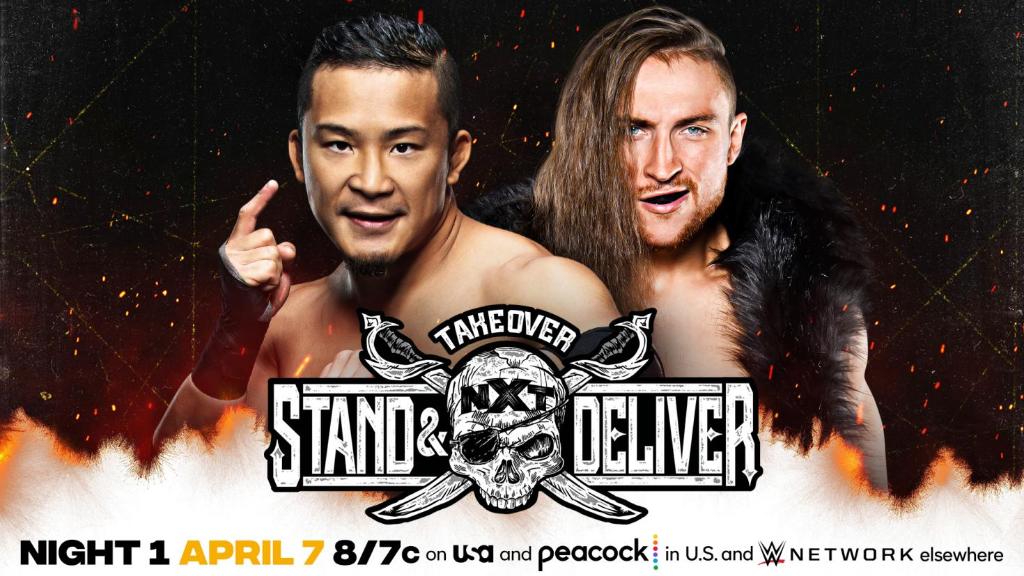 This came about quickly. A backstage interview by KUSHIDA that was interrupted by Pete Dunne was the first step on last week’s edition of NXT. Dunne referenced KUSHIDA claiming he was the best technical wrestler and looking to prove him wrong. When they crossed paths during the NXT North American Title Eliminator, it was certainly a case of one-upmanship. In fact, their desire to prove that they were each the best technical wrestler in the world cost them an opportunity to be in the eliminator.

Now granted, they’re doing so also lent itself an opportunity for both to face each other in a one-on-one matchup. For Dunne, he continues to look meaner and meaner each time he’s on screen. While experience is certainly in the favor of KUSHIDA in this matchup, it is their willingness to physically dissect their opposition that is the most intriguing quality of this match.

Whether it was Lumis’ kidnapping of Austin Theory to his rather alluring effect on Indie Hartwell, Dexter Lumis has shaken up The Way in one way or another. Gargano will likely be in attendance for this match, and if he can influence the winner, he likely will.

The entire build of this match has been unique. Typically, the challenger will pursue the champion. They will do everything in their power to be granted a championship match. In fact, the challenger will often do everything in their power to get under the skin of the champion until they are granted a championship opportunity. With this match, it is unlike any other in recent memory.

From Shirai’s walking in on González and Kai after losing the NXT Women’s Tag Team Title match to confronting her once again in the ring, Io Shirai was in pursuit of González. It is so refreshing to see the champion want to take out the much larger challenger. Will this be González‘ time to shine on her own, or will the genius in the sky, walk out with championship?

Over the past couple of weeks, the loss of Timothy Thatcher alongside Tomasso Ciampa led to a new opportunity. That opportunity came in the way of a beatdown. Ciampa was beaten down by the NXT UK Champion WALTER when Ciampa attempted to thwart off Imperium members Marcel Barthel and Fabian Aichner. Fans will recall the story goes even further back as Barthel, Wolfe, and Aichner attempted to lure Thatcher back into Imperium.

When we say ‘back,’ what we are referring to is Thatcher’s past prior to his joining NXT. During Thatcher’s time, he was part of a faction known as Ringkampf. Today, Ringkampf may not exist, but the ring general does. Ciampa may not walk away as the champion but the journey to get to this point is important. It is among the matches on night one fans need to see.

As fans are aware, this match is to determine the new NXT Tag Team Champions. In a recent tag team championship match between Oney Lorcan, Danny Burch, Finn Balor, and Karrion Kross, it was Burch that suffered a significant injury. The injury forced the champions to be stripped of the titles. Each of the teams involved in this matchup can stay claim to these titles. Both MSK and GYV faced each other in the finals of the Dusty Cup.

Betrayal can only be met with one way to resolve it, vengeance. William Regal was tired of these two ’embarrassing’ the company and having the cops involved. The match initially came about because Cole’s betrayal towards O’Reilly also led to the Undisputed Era’s end. After one superkick by Cole one week and a neckbreaker on steel steps the following week, Kyle O’Reilly appeared out of action for some time, or fans thought. When Adam Cole was challenging for the NXT Championship only to have O’Reilly slowly approach ringside, the result would ultimately be a loss.

O’Reilly would stalk Cole, who would crawl on his backside only to have his Undisputed Era armband taken from him. On this night, these two can do anything to each other anywhere and using anything. If their past matches against one another are any indication, this should be an absolute WAR.

From the moment Blackheart and Moon captured the titles, it was evident who they would be on a collision course with for the titles. Fans will recall as the new champions walked out from their match and headed to the backstage area, they were congratulated by most of the women’s roster. That is, except for The Way’s Hartwell and LaRae. Both women looked on in disgust as to what they had just witnessed. LaRae and Hartwell wanted to be the ones that captured the titles, and jealousy immediately began to set in.

From there, the jabs at the champions would begin to mount. What is interesting, however, is we aren’t exactly sure about the ‘challenge’ issued. Did LaRae and Hartwell officially challenge the champions? Regardless, the champions face a new set of challengers for the titles, and it is the Poison Pixie and Ms. Hartwell.

As we release this preview, the person that will face Gargano is a mystery. In the night one portion of the preview, we tried to crunch the numbers and play the odds with who would win. While we won’t attempt Steiner math here, let’s at some things to consider. If we divide up the number of competitors by 100, each has a 16.7% chance of winning the gauntlet. However, that percentage doesn’t take into account the competitors’ placement in the match. It also doesn’t consider each individual’s personal stamina, and most importantly, who is booked to threaten for the title.

All it does is provide virtually low chances for everyone involved. Gargano will be the most rested of anyone involved in either match. So while he may complain about not having enough time to prepare for his opponent because of William ‘Cuckoo Bananas’ Regal, he is still likely to walk away as the champion.

Finally, this match is set to take place. While it was only a matter of time before both champions would cross paths, the built-in match to decide who the true champion Since the travel ban preventing the likes of talent from the United Kingdom and Europe was lifted, fans have seen several of NXT UK’s stars appear on the NXT brand. While it is great to see a number of those involved included, it was important for one in particular to appear.

When ‘The Irish Ace’ announced, he was coming to NXT and coming for Santos Escobar. The time to be confronted by the man that was never stripped of the title is now. It is a case of the man that simply couldn’t defend it in North America confronting the man that captured it without defeating the actual champion! Both men have a ton of momentum going into this match. But this could be the time for the Irish Ace to stand alone.

‘What took you so long?’ With those words, the NXT Champion would face his next challenge. As many are aware, Kross was stripped of the title due to an injury and his inability to defend it. Finn Balor, on the other hand, defeated Adam Cole for the title as both were former champions contending for it. It would be easy to simply say that Karrion Kross will lay claim to the title because he never actually lost it.

This past week viewers were privy to the training and preparation of both champion and challenger. Balor is different this time, though. He doesn’t appear to be simply a pushover for the title but equally as ruthless as the former champion. The one intangible in this match is Scarlett. She can provide the distraction (and likely will) in this matchup. Will the end be here? Not if the Prince has anything to say about it.