This Saturday night, No Surrender returns as an IMPACT Plus exclusive event. This year’s No Surrender will be the 13th overall and the first since 2019. Saturday night’s card is absolutely stacked, with 41 wrestlers scheduled to compete over 9 matches. The stars of IMPACT Wrestling have their chance to shine at No Surrender. Here’s a breakdown of what you can expect on Saturday night.

On November 24th, 2020,  Larry D of XXXL confessed to the attempted murder of John E Bravo. He said it was a crime of passion that he shot Bravo because he took Rosemary from him. On January 19th, we learned that Larry D was framed. The real culprit was, in fact, Taya Valkyrie. Larry D and Acey Romero sent Valkyrie to prison but vowed revenge on Rosemary. However, neither man was keen on hitting Rosemary. To that end, they enlisted someone who was: Tenille Dashwood. Finding themselves outnumbered and outweighed, Rosemary and Crazzy Steve had to find a partner. This week on IMPACT Wrestling, they found one in the form of AAA luchador Black Taurus. On Saturday night, we’ll see how the new DECAY holds up as they face XXXL & Tenille Dashwood in a 6-person intergender tag team action.

On this week’s IMPACT Wrestling, Cousin Jake cut an in-ring promo about his future. He said he thought he had it all figured out. He was wrestling with his cousin Cody as The Deaners, and everything was good. Then, at Final Resolution, Cody betrayed him to join Eric Young and Joe Doering in their rampage through IMPACT Wrestling. Since then, Jake has been kind of lost in he shuffle. He said he has a choice to make, but he’s not sure what to do. Then, Violent By Design offered him a reunion with his cousin and a place among their ranks. Jake responded that if you don’t stand for something, you stand for nothing. But he’s not nothing; he’s Jake Something. On Saturday night, it’s a family brawl as Jake Something may finally get revenge on his backstabbing cousin.

In IMPACT Wrestling, the triple threat match is a staple of their no-weight-limit X-Division. This Saturday night, however, we’re going to see a triple threat match with a twist. The Triple Threat Revolver match is a hybrid of the triple threat eliminator match and the gauntlet match. Three men start in the ring, and when one gets pinned or submitted, another joins the fray. Looking at the lineup for this match, Ace Austin looks like the odds-on favorite, having recently won the Super X Cup. However, Blake Christian is keen to get his heat back from his loss to Austin at Genesis. Trey Miguel recently returned to IMPACT Wrestling and is as hungry as ever for his first championship in the company. Of course, we can’t count out Willie Mack and Chris Bey, who’ve both recently held the X-Division championship. We’re in for a treat with this 8-man Triple Threat Revolver match this Saturday night at No Surrender. 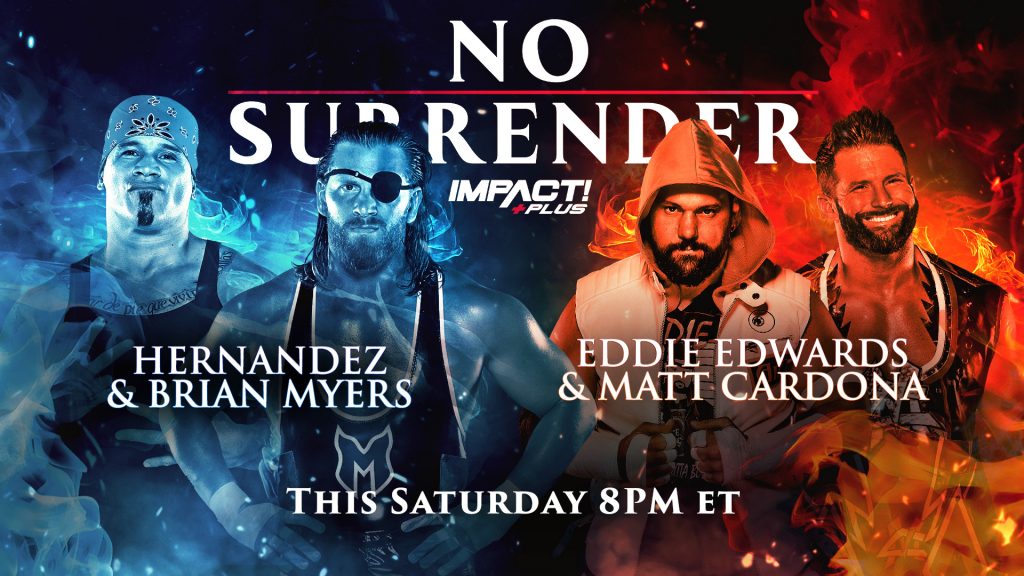 On January 26th, Brian Myers looked to extend his 7-match winning streak against Eddie Edwards. Edwards was not about to let Myers take his spot in the pecking order. In that match, he had to resort to jabbing Myers in the eye and biting him. Last week, Myers cut a promo about how Eddie Edwards is a shell of the man he used to be. Formerly a gifted technician, Eddie has become, as Myers put it, a backyarder and a glorified stuntman. Edwards responded to Myers’s torrent of insults with a flurry of blows, only to get jumped by Hernandez. Now Eddie’s got himself some backup in the form of Myers’s former tag team partner Matt Cardona. Find out how these impromptu tag teams fare this Saturday night at No Surrender.

On November 10th, Rohit Raju defeated TJP in an X-Division Championship match. The stipulation of that match was if TJP lost, he could not challenge Rohit for the championship again. At Final Resolution, TJP’s alter ego Manik answered the Defeat Rohit Challenge, capturing the X-Division championship. Since then, Rohit has been trying to prove that Manik and TJP are the same person. On January 19th, he got his wish when TJP casually strolled in on a conversation between Rohit and IMPACT Wrestling executive Scott D’Amore. When D’Amore acknowledged TJP as champion, Rohit protested, raising the stipulation from November 10th. D’Amore offered them a match on the February 12th episode of IMPACT Wrestling. In that match, Rohit pinned TJP after interference by the returning Mahabali Shera. At No Surrender, Rohit gets his championship rematch, with Shera in his corner. Can TJP overcome 2/3 of the Desi Hit Squad on his own?

In a rematch from Hard to Kill, Tasha Steelz and Kiera Hogan will defend their championships for the first time ever against Havok & Neveah. These duos have been at each other’s throats, seemingly since last summer. The return of the Knockouts Tag Team Championships only intensified their feud. It all culminates on Saturday night in a Texas Tornado No DQ match. This match is an Anything Goes match in every sense of the term. All four women are legal, and with the No DQ stipulation, we’re likely to see them bust out the hardware. Katie, bar the door because we got ourselves a barn burner in store for the first-ever defense of the new Knockouts Tag Team Championship.

The Knockouts division shifted dramatically when Father James Mitchell captured Su Yung. The night of December 1st, The Undead Bride held #1 Contendership. We expected her to return as her alter ego, Susie, but on January 12th, we met a new alter ego. The pant suited Susan arrived to restrain Rosemary during a match between Kimber Lee and Taya Valkyrie. Now with Susan and Lee at her side, Knockouts Champion Deonna Purrazzo could reign as she pleased. Jordynne Grace and Jazz both stepped up to challenge Purrazzo’s rule, but each fell victim to her numbers game. On February 2nd, ODB made her return to IMPACT Wrestling to save Grace and Jazz. This week, ODB defeated Kimber Lee in singles action, only to fall victim to a post-match beatdown. Following the match, Susan stormed into Scott D’Amore’s office to demand this match for No Surrender.

On top it being the day No Surrender takes place, February 13th is also Tommy Dreamer’s 50th birthday. Despite his 25+ years in the business, The Innovator of Violence has not held a championship in IMPACT Wrestling. On January 26th, Rich Swann took a moment to acknowledge this fact. In recognition of Tommy Dreamer’s 50th birthday, the work he’s done in wrestling, and all the help he gave a young Rich Swann, The IMPACT World Champion offered him a championship match. Swann and Dreamer are determined to steal the show with this match on Saturday night.

On January 19th, Matt Hardy returned to IMPACT Wrestling as the manager for AEW’s Private Party. The young, hungry AEW tag team challenged Karl Anderson and Doc Gallows for the IMPACT World Tag Team Championships. However, The Good Brothers were a bit busy with Alex Shelley and James Storm. Doc Gallows suggested their challengers face off in a #1 Contender’s match, which Private Party won. Last week on IMPACT Wrestling, Sabin and Storm lobbied again for a title match. The Good Brothers agreed to the proposed match, which took place this week. During that match, Matt Hardy, Marq Quen, and Isiah Kassidy watched intently from the entrance ramp. Then, just as Sabin had Anderson in a pinning predicament, Private Party rushed to the ring to break up the pin. Having laid hands on the active competitors, Private Party got the match declared a no contest. As a result, The Good Brothers will now have to defend their IMPACT World Tag Team Championships in a triple threat match.

Be sure to stay tuned to the Pro Wrestling Post for this and additional stories from the wrestling world. Readers can rely on Pro Wrestling Post to be their daily source for all things inside the squared circle. As a result, readers can expect daily news, history, and so much more. Please visit IMPACT Wrestling’s official website here for news on the promotion and upcoming events.