Finally, IMPACT Interrogation is back thanks to yours truly as a long month has come and gone and we can enjoy some of the best wrestling going on right now, which was kicked off by a must-see women’s bout. That bout was between number one contender for the IMPACT Knockouts Championship, Jordynne Grace, and the one who knows its “all about her”, Tenille Dashwood.

Two of the best IMPACT Wrestling have to offer went one-on-one in the opening bout of the show and boy was it a treat. As most matches tend to happen, both women started off evenly matched early but ultimately the raw power of Jordynne Grace got an advantage at one point. Dashwood, the veteran she is, realized her speed was the biggest advantage here and attempted to utilize it to the best of her ability. Don Callis made the point on commentary that this was the first time Grace has been in real trouble in quite some time. The match found its finish when Tenille attempted to cradle Grace for the win but the power and smarts got Grace the win instead. Following the match, they shook each other’s hand before going their separate ways.

Oh, but before anyone got a shot to walk out, Taya Valkyrie came down to put an attack on Grace. The Dashwood gave assistance, however, leading to an exploder suplex by Grace to leave Valkyrie retreating.

Backstage, Moose told Rhino it was a tough situation that his Gore didn’t have the same effect as his spear. This promptly led Rhino to hit the Gore on Moose, leaving him down and out. This certainly is not over.

Two of the best athletes in IMPACT Wrestling were set to go head to head here following the great opening bout as the freshly returned TJP took on Daga. The athletic abilities of these two were not going to be overlooked here. Daga hit a picture-perfect sunset flip from the ramp that TJP rolled out of, but Daga was swift enough to hit the stomp afterward. A number of combinations between these two would lead to both men through hands at each other. TJP went for an armbar but was stopped by Daga. The technical expert continued to utilize submissions, going for the octopus but was met with another reversal by Daga, this time a single-legged Boston Crab. Fast forward a bit, TJP would hit the superplex, then immediately hit the detonation kick. He was not done, as he would lock in the kneebar and finally the Regal-Stretch for the win.

Rob Van Dam came down to the ring with his girlfriend, Katie Forbes, and could have easily made the crowd fall asleep. He wanted to stand up to everyone as he feels everyone has completely copied him and his moves. RVD then called his match at Hard To Kill as a dream match. Meh, but whatever he wants to believe. The former world champion had enough and got into the face of RVD. The fight was on and RVD, with the help of Forbes, faked the crowd out with a Van Daminator from the top rope and instead hit a mini one before walking out.

A singles match between two halves of the IMPACT World Tag Team Championship match at Hard To Kill took place as Rich Swann attempted to get a win over Ethan Page to get the advantage for his team and the champions. These two traded back and forth, and of course, Ethan Page’s better half attempted to change the result of the match. At one point, Rich Swann attempted a 450 Splash but was reversed by Page. Page then went for a Swanton but Swann had enough to meet him up top. Page tossed his competitor to the middle of the ring. He would hit the Swanton but not get a win. Swann attempted a tope to Ethan Page but instead hit Josh Alexander. Page then got in the face of Willie Mack, leading to a DQ on Mack’s part. This would give Page the win.

This match was the fastest on the night, as it wasn’t much of a contest. Despite some back and forth, Johnny Swinger got involved at one point to give Ryan an assist. Believe it or not, Ryan hit super heavyweight, Romero, with the “flip”, which in the end would give him the win.

Following the match, Austin dedicated the match to Trey’s mother. One of the more underrated heel’s in wrestling. 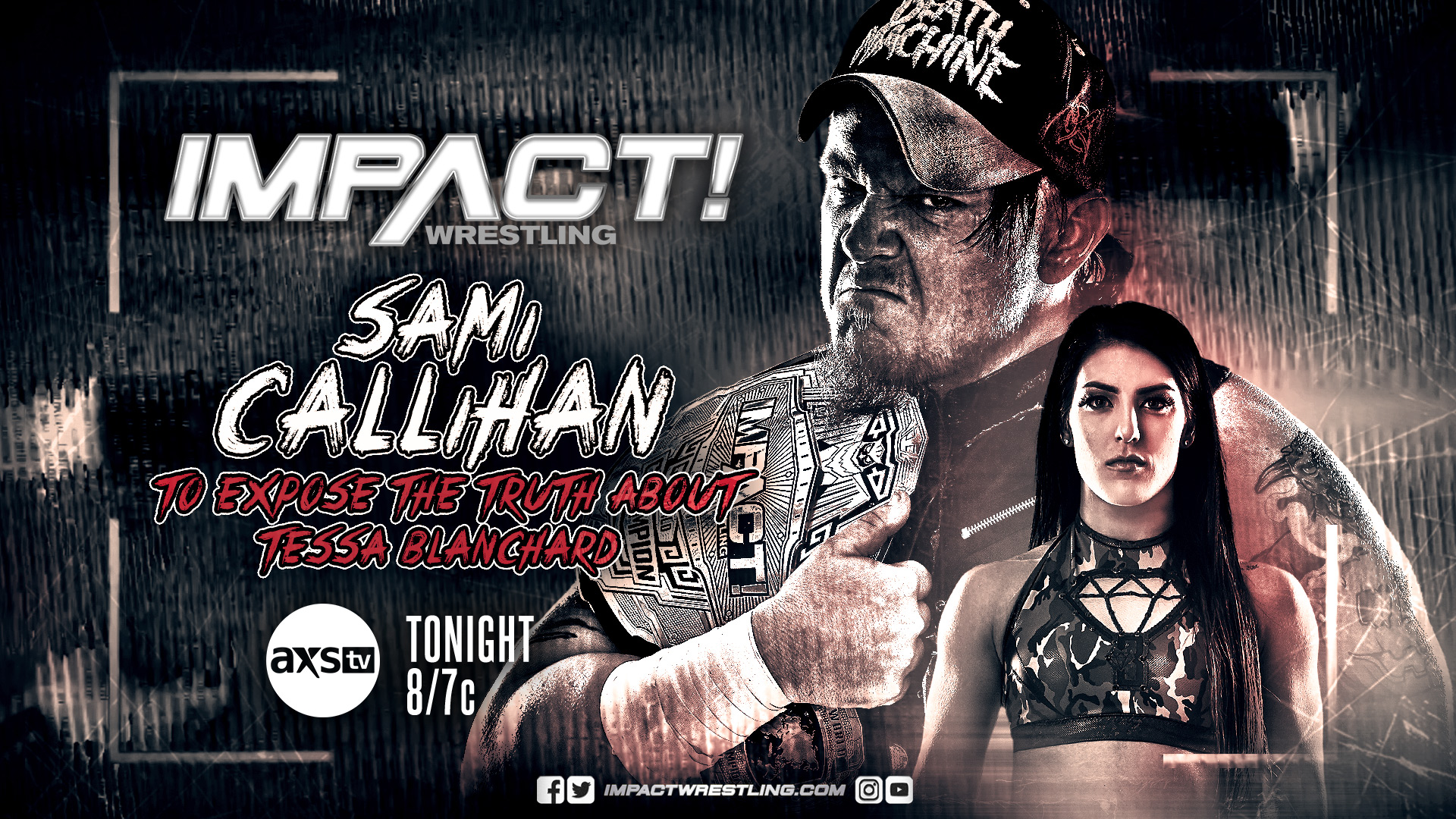 Sami Callihan wanted to expose Tessa Blanchard and prove his Hard To Kill opponent is a phony. Callihan was angry at the fans for booing him despite him treating Tessa Blanchard just like he would any male opponent. He proceeded by calling Tessa a spoiled brat and someone who got handed everything while he had to scratch and claw for everything he has. He got to the top of the mountain by himself. He didn’t need his daddy to make a call so he could get a tryout.

“The Diamond” of IMPACT Wrestling had enough as she made her way out. Madman Fulton attacked from behind and the beat down of the best thing to happen to IMPACT was on… until Ken Shamrock made the save and evened the odds. Callihan and Tessa battled to the back while Fulton attacked Shamrock in the ring. Tessa and Callihan fought through the streets of New York City. He through her into the trailer but Tessa was not by any means done. She speared him into the wall but he fought back and threw her face-first into the truck outside. The champion then put caution tape around her next to try and choke her out. These two continued to fight and go after each other. Tessa would jump from the back of a truck to take him down before he bit his challenger and ran off.

She was not done, and they had to be separated as you could hear Callihan screaming “I’ll kill her” as the show went off the air. These two do not like each other one bit, which leads to the fans being the luckiest people of them all as this match will be must-see.