Brace For IMPACT for 02/3/22 – ROH INVASION CONTINUES! Saturday night saw a historic event for IMPACT! Wrestling, as reigning Knockouts Champion Mickie James made an appearance at #20 in the Women’s Royal Rumble match. With the Knockouts Championship belt around her waist, Mickie James lasted an admirable 11:40 before being eliminated by fellow WWE Women’s alumnus, Lita.

James’s Royal Rumble appearance is sure to bring more eyes onto IMPACT Wrestling’s weekly program, and as such, some readers may be new. If such is the case for you, welcome to Brace for IMPACT!, your weekly breakdown of what you can expect Thursday nights at 8:00 PM Eastern on AXS TV. Things have been pretty crazy lately, as a number of ROH refugees have debuted for IMPACT! in recent weeks.

With Matt Taven’s Honor No More faction running amok and the return of Jay White and BULLET CLUB, it seems like things are spiraling out of control in the leadup to No Surrender on February 19th. Already announced for the card are W Morrissey (formerly Big Cass) vs Moose for the IMPACT World Championship and Mickie James vs Tasha Steelz (w/Savannah Evans) for the Knockouts Championship.

Along with that, Matt Taven and Honor No More will fight for their lives against Chris Sabin, Eddie Edwards, Josh Alexander, Rhino, and Rich Swann in a 10-man Hardcore War. We’re sure to see more matches added to that card this Thursday night. 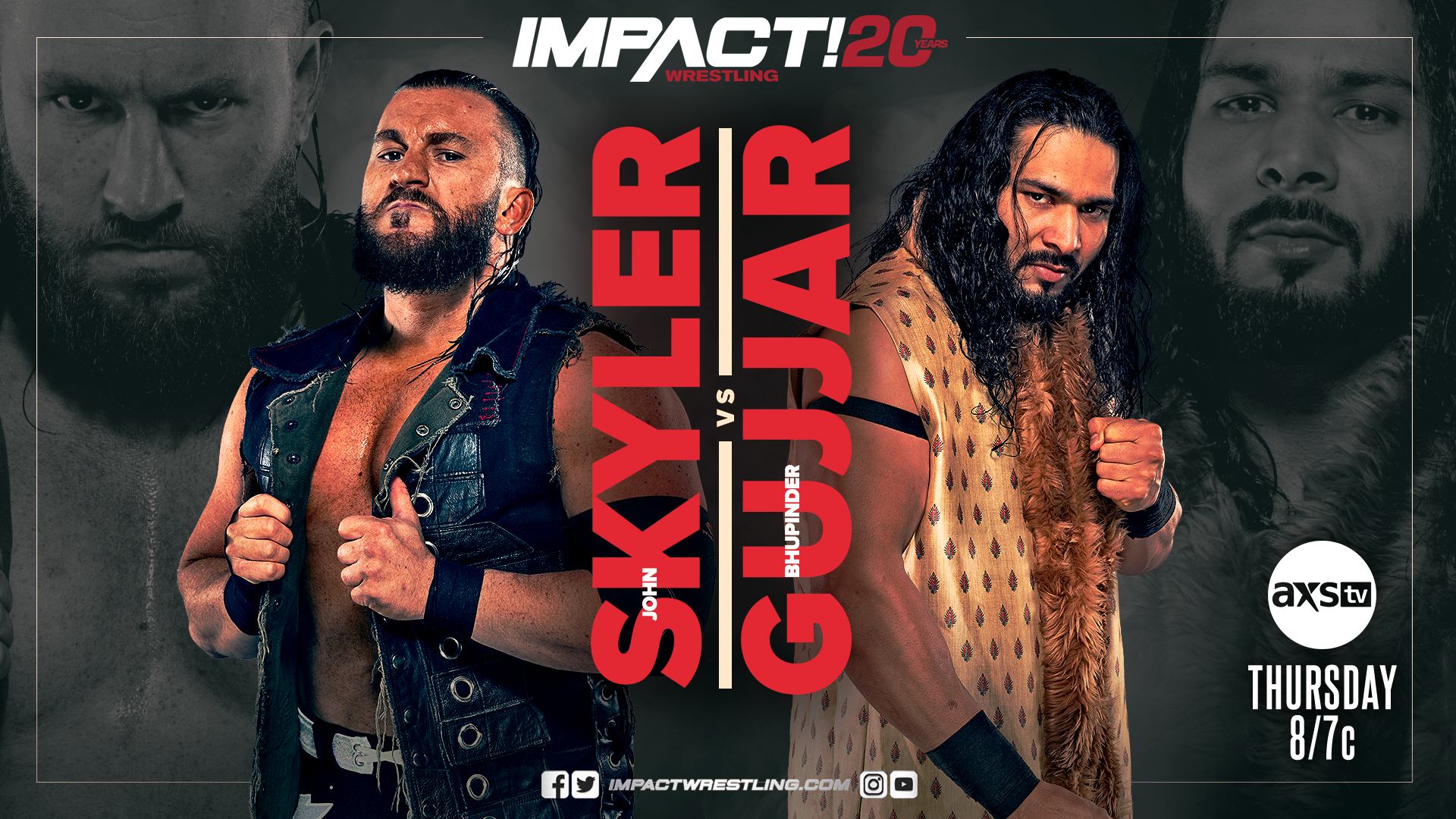 Since debuting with the company in July of 2021, John Skylar has been building his reputation. After a big win over Matt Cardona (with help from Rohit Raju and Mahabali Shera), Skylar became a fixture of Before The IMPACT, where he worked a short program with fellow newcomer Laredo Kid. He has since participated in the X-Division Championship tournament and the IMPACT Digital Media Championship Tournament, coming up short in both.

He has also unsuccessfully challenged for Jordynne Grace’s Digital Media Championship and Trey Miguel’s X-Division Championship. This Thursday, he faces the debuting Bhupinder Gujjar. The IMPACT! Wrestling hopeful is getting his big break on national television after years of work on the indies. Executive VP Scott D’Amore will be watching intently as Bhupinder Gujjar squares off against John Skylar this Thursday night on AXS TV. 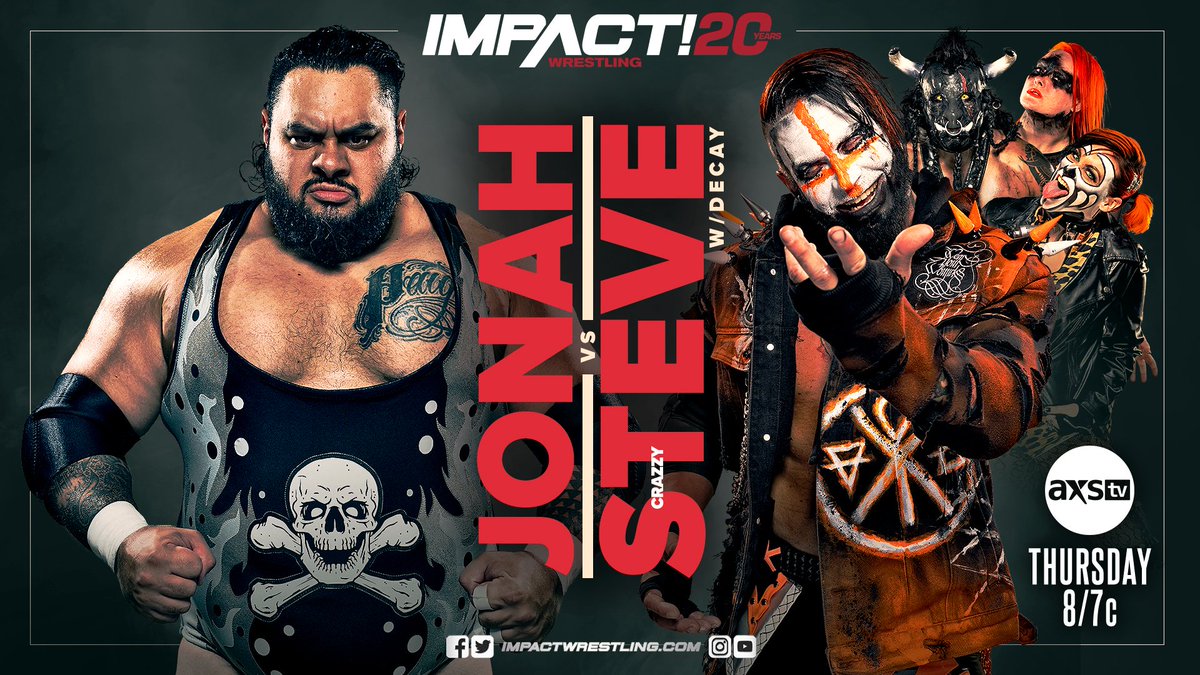 Last week on IMPACT Wrestling, JONAH absolutely flattened Johnny Swinger in singles action. But one victory isn’t enough to sate the gargantuan Aussie. This week, he’s at it again, facing DECAY’s Crazzy Steve. DECAY have been on something of a roll in tag team action, racking up wins against The Learning Tree, Fallah Bahh & Hernandez, and The Influence.

But now it’s time for Crazzy Steve to return to singles action. With his misfit family and tag team win streak behind him, will Crazzy Steve have what it takes to topple JONAH this Thursday night? Or will he become just another body on JONAH’s path of destruction?

Brace For IMPACT for 02/3/22
Vincent vs Josh Alexander 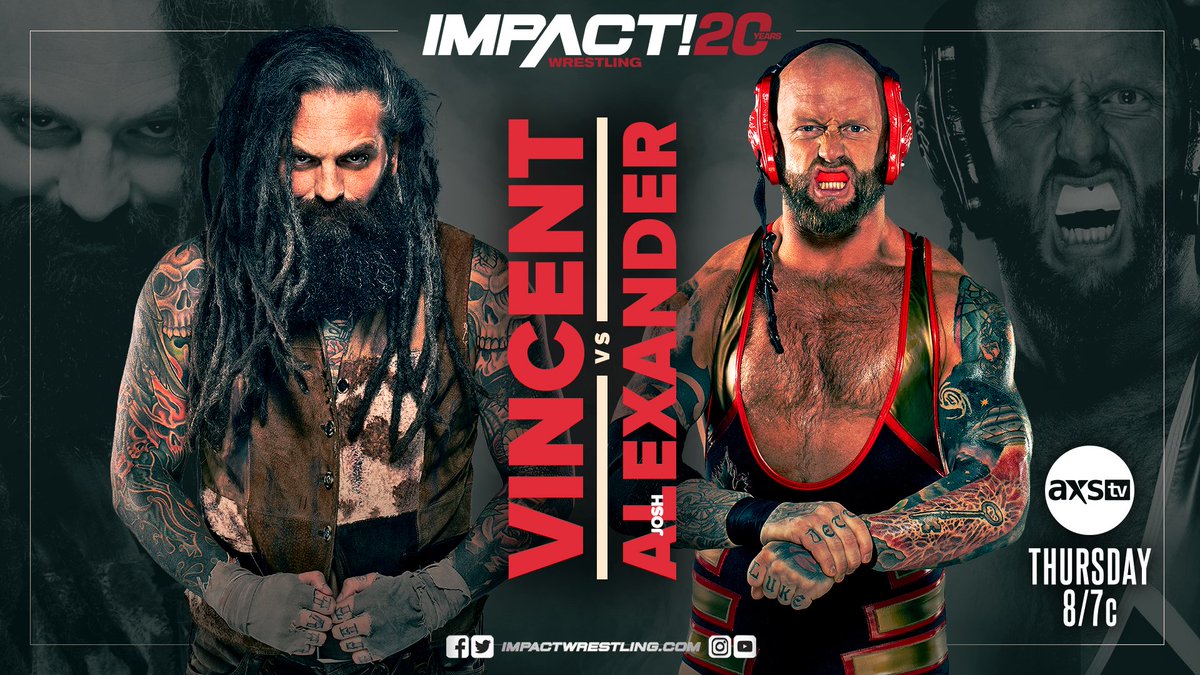 The growing threat of Honor No More has not escaped IMPACT Wrestling regulars. Since arriving at Hard to Kill, the former ROH faction has launched several attacks on IMPACT stars. At No Surrender, they will face the consequences of their actions, as they take on a team of IMPACT Wrestling’s finest in a 10-man Hardcore War.

But before then, they’ll have a few opportunities to demean their opponents. Vincent is coming off a major victory at Final Battle, having captured the ROH World Six Man Tag Team Championships with Dutch and Bateman. Meanwhile Josh Alexander’s last televised matches are wins over JONAH and Charlie Haas. With their momentum about even, it’s anyone’s to win this Thursday night on AXS TV. 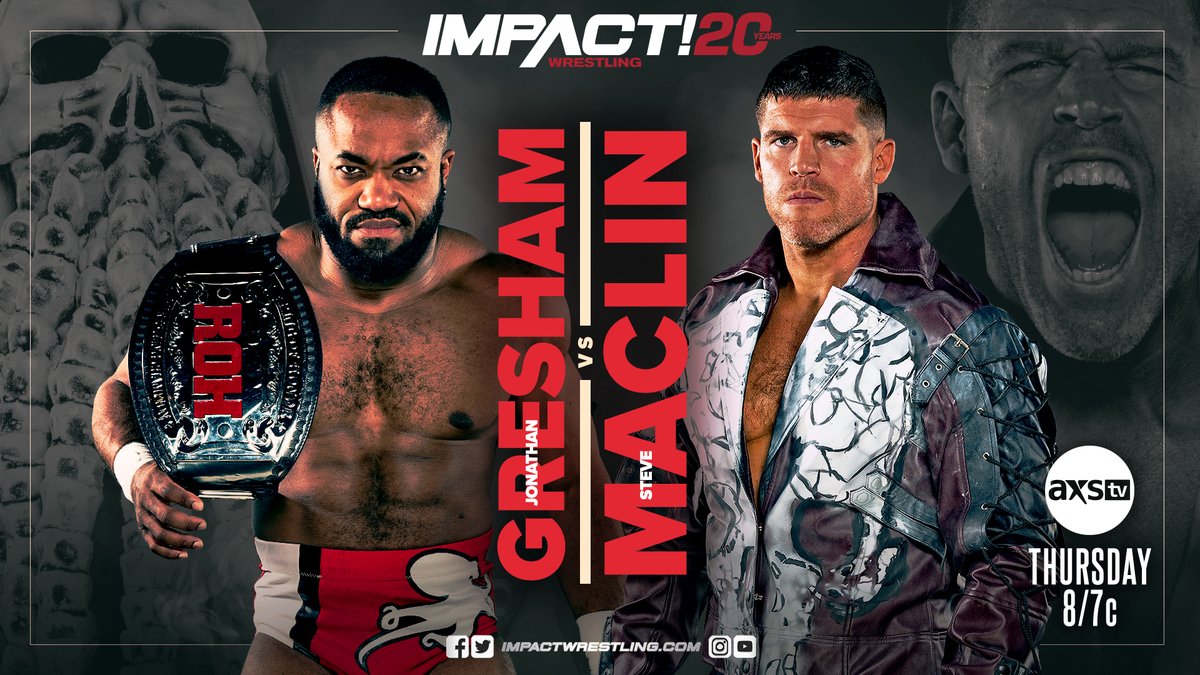 A master of Pure Rules Wrestling, Gresham took just over 10 minutes to put away Maclin. But the fight isn’t over yet. This week, Maclin faces Gresham one more time under regular rules. Should Maclin defeat Gresham again, we might see an ROH World Championship match at No Surrender. 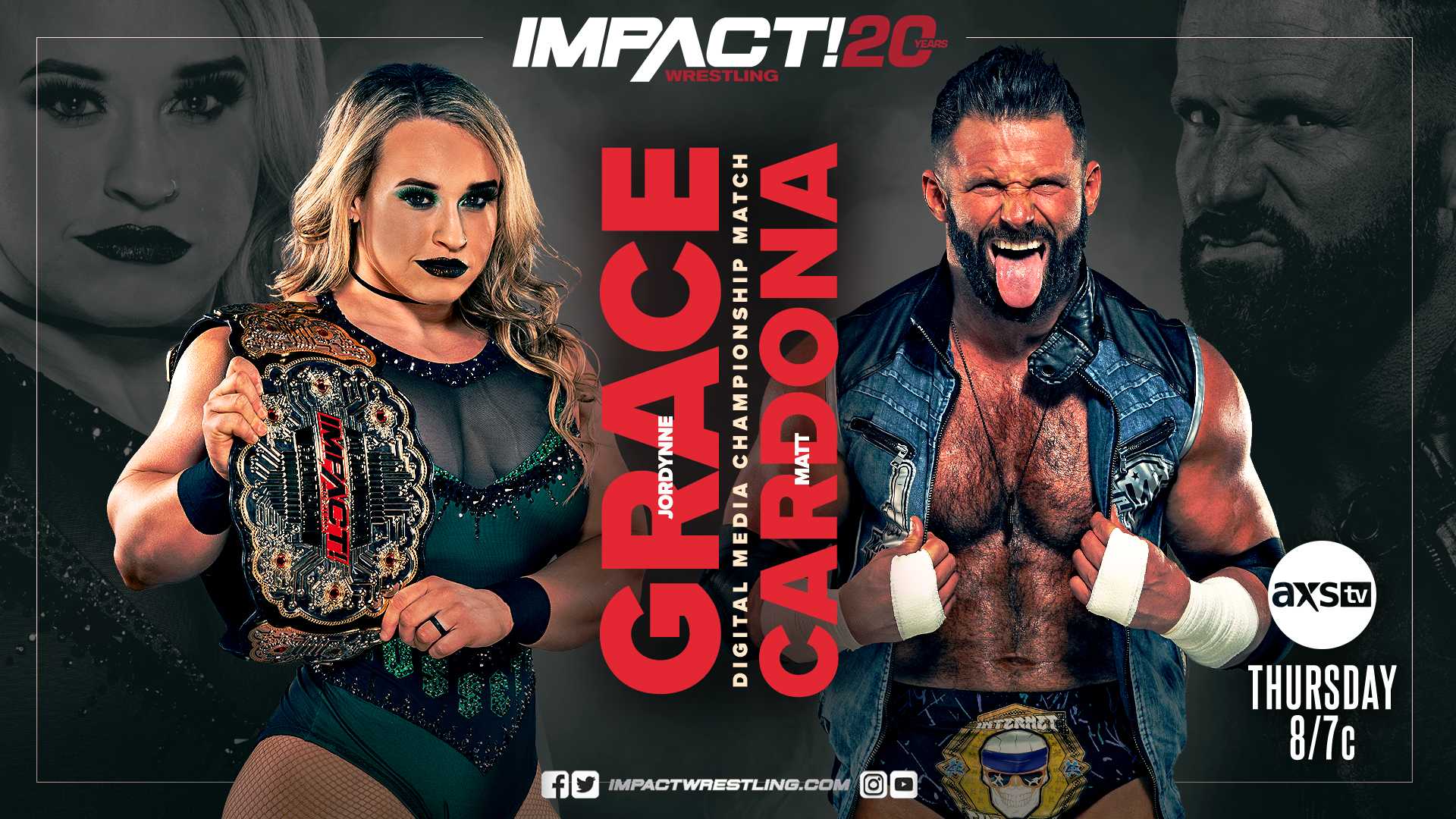 Jordynne Grace’s run as Digital Media Champion has been full of ups and downs. She went on an absolute tear in the tournament, and had excellent title defenses against John Skylar, Chelsea Green, and Lady Frost. However, her last few outings have been disappointing to say the least. She entered the Ultimate X #1 Contender’s Match at Hard to Kill, but failed to capture the X.

Her team lost the 6-woman tag match on the preceding episode of IMPACT Wrestling. This week she’s got a new challenge. Matt Cardona announced his intentions to capture the Digital Media Championship on last week’s episode. The former (self-crowned) Internet Champion isn’t happy about someone else being “champion on the internet” and he’s gunning for that title. 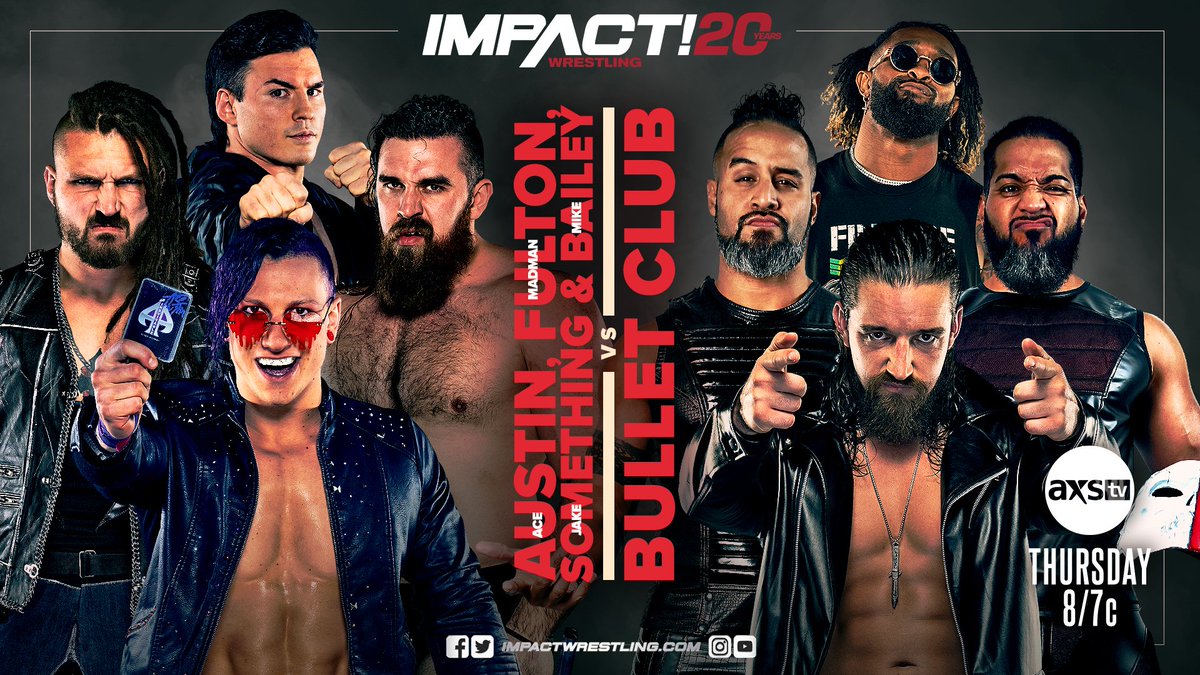 Last week on IMPACT Wrestling, Tama Tonga and Tanga Loa interrupted Mike Bailey vs Jake Something. The Guerrillas Of Destiny annihilated Bailey and Jake to send a message to IMPACT World Tag Team Champions Doc Gallows and Karl Anderson. It appears G.o.D and The Good Brothers have some unfinished business from their days in BULLET CLUB. But before they can get to their targets, they have to settle the score from last week.

Mike Bailey and Jake Something will get their opportunity at revenge, with Ace Austin and Madman Fulton in tow. But with two faces and two heels on the same team, can they keep together long enough to fend off Jay White, Chris Bey, and G.o.D? Find out in this explosive 8-man tag team match this Thursday night on IMPACT! Wrestling.

What Else To Expect

Stay tuned to Pro Wrestling Post for this and additional stories from the wrestling world. Readers can rely on Pro Wrestling Post to be their daily source for all things inside the squared circle. As a result, readers can expect daily news, history, and so much more. Please visit IMPACT Wrestling’s website here for news and information on the promotion and upcoming events.