On Thursday, December 22nd, 2022, IMPACT Wrestling aired another episode of IMPACT as we review after the IMPACT for 12/22/22.

The match starts off with Jessicka & Deonna Purrazzo exchanging wristlocks before Purrazzo rolled over to break Jessicka’s hold. Jessicka hit a waist lock takedown on Purrazzo, to which Purrazzo responded by tagging in Gisele Shaw.

Jessicka hit the Dusty Strikes on Shaw before hitting a corner splash on Shaw. Rosemary tagged in and bit Shaw’s forehead, to which Shaw responded by launching Rosemary to the corner. Rosemary locked in a leg scissors on Shaw on the rope before falling outside of the ring, but Purrazzo caught her with a boot of the apron before sending Rosemary back into the ring.

Purrazzo tagged in and hit a snap mare into a headlock on Rosemary, but Rosemary threw the body shots before hitting a fisherman’s suplex on Purrazzo. Shaw & Jessicka tagged in, with Jessicka hitting a knee strike, an abdomen kick, a Buzzsaw Kick, a body slam, and a running basement crossbody on Shaw for a near fall.

Things broke down in the ring, with Jessicka & Rosemary tossing Deonna & Shaw onto one another. Jessicka hit a backbreaker before Rosemary hit a spear on Shaw for the win.

Backstage Knockouts Champion Jordynne Grace & Mickie James talked strategy ahead of their tag match against Tasha Steelz & Savannah Evans, with Grace clarifying to James that she is only there to make sure James makes it to Hard To Kill.

There was a backstage segment between Tommy Dreamer & IMPACT World Champion Josh Alexander. Alexander accepted Dreamer’s apology but emphasized that he wanted him to let him handle Bully Ray on his own. 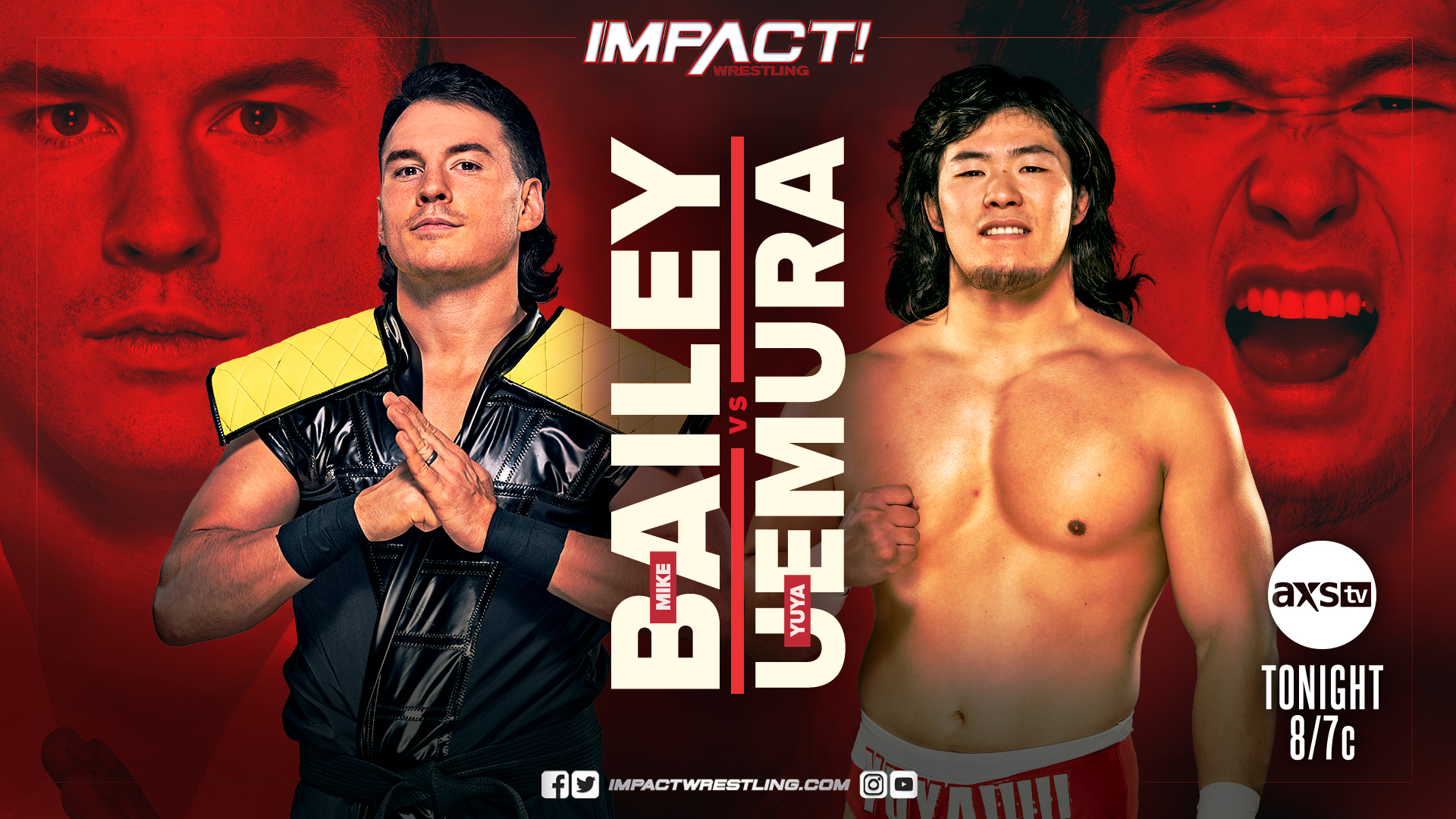 Mike Bailey & Yuya Uemura locked up and did some mat wrestling before they got back up & locked up again. Uemura hit a shoulder tackle & two-arm drags on Bailey before locking in an arm lock on Bailey, which Bailey broke out off before hitting a double back-flip into a chest kick on Uemura. Bailey hit a Helluva Kick, a body slam, and a double knee drop off the middle turnbuckle on Uemura for a near fall.

Uemura hit an uppercut, a double chop, a dropkick, and a Back suplex on Bailey for a near fall. Uemura clotheslined Bailey out of the ring before the commercial break. Back from the break, Uemura hit a body slam on Bailey for a near fall. Uemura got Bailey in the ropes and hit two chops on Bailey, but Bailey responded with a boot and got Uemura’s hands before hitting a short-hand shotgun dropkick on Uemura. Bailey hit a running Tornillo Splash on Uemura for a 2 count.

Bailey hit another three chest kicks on Uemura to a thud. Bailey went for a PK Kick, but Uemura avoided it and climbed to the top rope. Bailey met him up before hitting an enziguri kick to send Uemura out of the ring, to which Bailey responded by hitting a triangle moonsault to the outside.

Back in the ring, Bailey hit a chest kick, a snap mare into another PK Kick, and a Moonsault double knee drop on Uemura for a near fall. Bailey went for a spinning Windmill Kick, but Uemura caught his leg and hit a double underhook overhead suplex on Bailey. They got up & exchanged strikes before Bailey hit a big boot & a thrust kick, but Uemura responded with a lariat on Bailey, then goes for a cover, but Bailey kicks out.

Uemura hit a corner dropkick and a Spinning Uranage on Bailey before climbing to the top rope, but Bailey rolled out of the ring before Uemura caught him with a diving cross-body. Bailey caught Uemura mid air with a Code Breaker. Bailey evaded Uemura’s offense before Uemura hit a German suplex but Bailey got back up and hit the Spinning Windmill Kick before hitting the Ultima Weapon gets the job done.

After the match, Kenny King cut a promo from Arena Mexico for CMLL with King talking trash to the Florida crowd and telling him See you never.

Major Players came to Scott D’Amore’s office to demand a rematch. IMPACT World Tag Team Champions Motor City Machine Guns revealed to them & Heath & Rhino that they would make them a Fatal 4 Way Elimination between them & Bullet Club (Ace Austin & Chris Bey) for the IMPACT World Tag Team Titles at Hard To Kill.

John Skyler & Jason Hotch came to the ring for their match against Zicky Dice & Johnny Swinger, but Bully Ray ran Swinger & Dice out of the ramp to confront Hotch & Skyler. Ray attacked Hotch & Skyler before he strapped Hotch into the top rope with a zip tie, but Josh Alexander came in to make the save.

Instead, Skyler & Hotch betrayed Alexander and attacked Alexander, causing a 3 man assault on Alexander. Tommy Dreamer tried to make the save, but Ray attacked Dreamer with a low blow before slamming his head with a ladder as Alexander watched in desperation.

Winners: No One (Match Never Got Started)

Maclin went for a back elbow, but Swann evaded and hit a Hurricanrana & two dropkicks on Maclin. Swann went for a back flip cross body on Maclin, but Maclin caught him and hit a backbreaker before launching him to the corner with an Irish whip that sends us to a break.

We are back from the break, Swann hit a jab, a chop, three punches, and a Spinning Roundhouse Kick on Maclin but Maclin responded with a vicious Urange on Swann for a near fall because Maclin lifted Swann’s shoulder.

Maclin hit a backbreaker on Swann before slamming him again with an Irish whip. Maclin hung Swann and went for a corner spear, but Sann evaded and laid in the Dusty Punches, two backfists, a slap, and a Buzzsaw Kick on Maclin for a near fall.

Swann to the top rope but Maclin rolled to of the ring but Swann hits a cannonball on Maclin to the outside. Swann went for another cannonball, but Maclin evaded to make him crash to the ringside floor before slamming Swann’s head into the stairs & the ramp, causing the match to end in a double count out.

Winner: No One (Double Count Out)

After the match, Maclin was stopped by the referee before IMPACT’s security team came in to stop Maclin & Swann from brawling.

Backstage Eddie Edwards cut a promo backstage but was confronted by his wife, Alisha Edwards. Alisha told Eddie that in order to stop facing his past, he had to confront the past head-on, saying that’s would need to do so by beating Jonathan Gresham.

The match begins with Mickie James & Tasha Steelz locking up, with Steelz slamming James to the mat, but James slid under Steelz and hit a Thesz Press on Steelz. Jordynne Grace tagged in, but Steelz rolled to the other side to tag in Savannah Evans.

Evans & Grace locked up before Evans tossed Grace to the corner, but Grace leaped over Evans and hit a rising knee strike, a kick, and a sleeper on Evans, but Evans leaned Grace in the corner to allow Steelz to hit an enziguri kick on Grace’s neck before the final commercial break.

After the break, Steelz hit a kick to Grace’s back before stomping away at Grace in the corner. Grace rolled over Steelz to tag in James. James blasted Steelz & Evans before hitting a flapjack on Steelz. James climbed to the top rope, but Evans pushed James to the mat to allow Steelz to get a near fall on James. Steelz got a headlock on names, but James broke out of the hold before Steelz hit a big boot on James for a near fall.

James got a roll-up on Steelz for a near fall, but Steelz got up and hit a lariat on James before tagging in Evans. Evans hit a Leg Drop on James for a near fall. Evans continued to attack James in the corner, but James responded by slapping Evans in the face. Evans drove James to the corner and hit a corner spear on James.

Steelz got James in a headlock in the corner as the referee was distracted before Steelz tagged in. Steelz & James exchanged strikes before Steelz hit a Buzzsaw Kick on James that only gets a 2 count. Steelz got James in a headlock, but James broke free from the hold before hitting a back elbow and a hurricanrana on Steelz. James hit a neckbreaker on Steelz before Evans tagged in.

James stopped walking and confronted Evans. James hit a forearm strike on Evans before evading Evans’s attempt at a corner spear and reversed it with a top rope Thesz press on Evans, but Steelz hit a thrust kick on James to break the pin.

Evans went for a full nelson, but James went for a pin, but Evans hit a Wheelbarrow German Suplex on James for a near fall. James slammed Steelz onto Evans, but Grace tagged in from behind. Grace hit a spinebuster on Evans before hitting a Muscle Buster to get the win for her team.

After the match, Jordynne Grace & Mickie James exchanged words before James lashed out and hit a Thrust Kick on Grace. James walked down the ramp staring daggers at Grace, with Grace being bamboozled by the Thrust Kick to close out this week’s IMPACT.

Please share with us what you thought of this week’s edition of IMPACT! and what you anticipate happening next week in the comment section below.

Stay tuned to Pro Wrestling Post for this and additional stories from the wrestling world. Readers can rely on Pro Wrestling Post to be their daily source for all things inside the squared circle. As a result, readers can expect daily news, history, and much more. Please visit IMPACT! Wrestling’s site here for news and information on the promotion and upcoming events pertaining to IMPACT are available on IMPACT+ and  FITE TV’s official website. FITE+ currently boasts 1000+ hours of live action each year. $4.99 a month/$49.99 a year with 7-day Free Trial.