On Saturday, December 10th, ROH Final Battle 2022 is set to take place. With seven matches on tap, each one has title implications making them meaningful as, at any moment, we could see a new champion crowned. With that said, what the event has lacked is a lack of build-around of a number of title matches.

While several key matches are sure to entertain because of how they are on paper, it’s always been something to watch ROH matches and care about them. Of any of the matches that has little to no build that many would look forward to would be the double dog collar ROH World Tag Team Championship match.

Will the rest prove to be better with little to no build? Tune in Saturday at 4 pm eastern to see ROH Final Battle 2022 to find out. 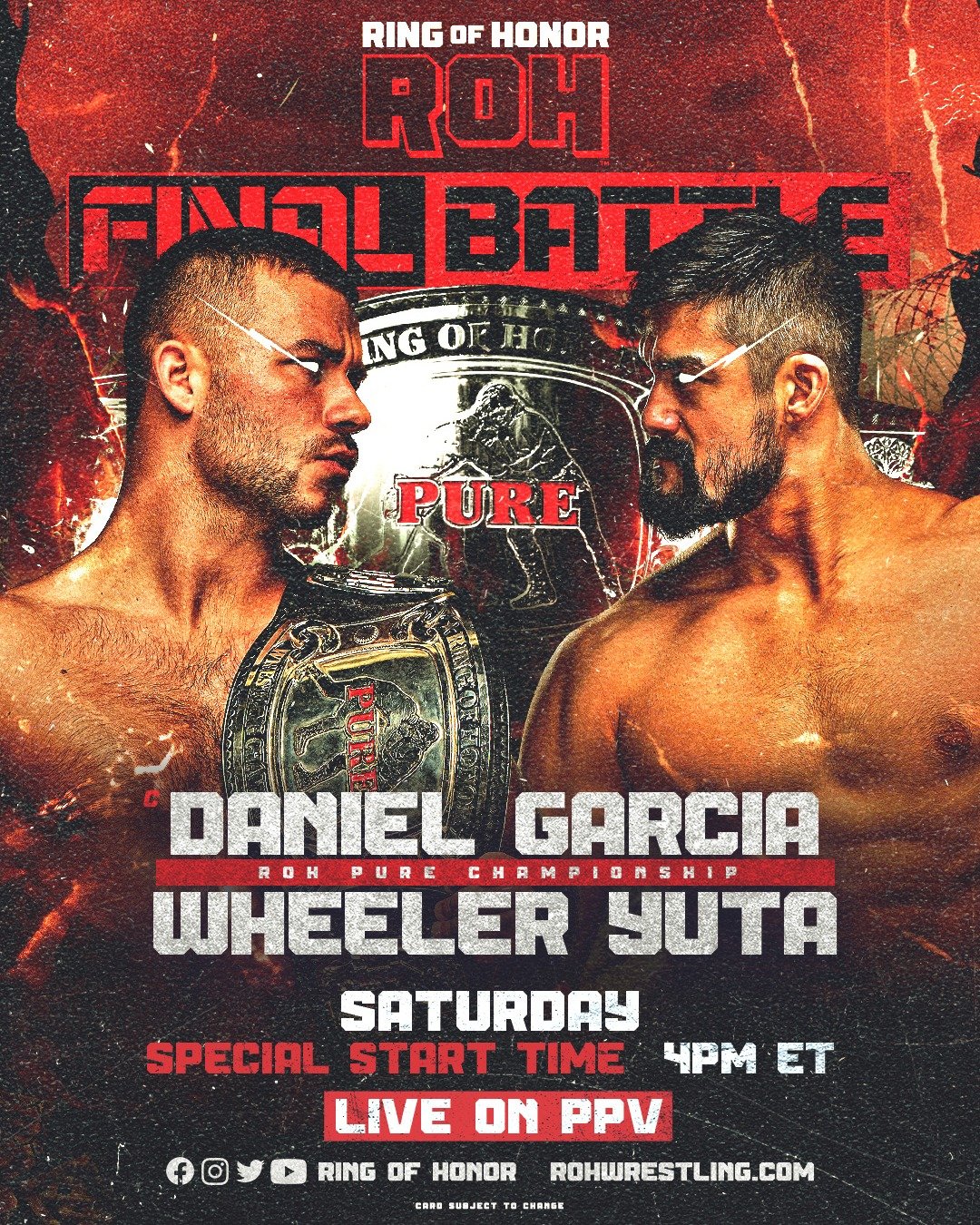 The action will be fast and furious with this first title match on the card. With ongoing animosity between these two rivals, Yuta and Garcia will do battle once again. We have seen Yuta hold the title, and we’ve seen Garcia defeat him for the title. With the Jericho Appreciation Society and The Not Quite Blackpool Combat Club doing battle once again, what can we expect?

We have seen what Dalton Castle has achieved on his own, and we seen what he has achieved with the Boys alongside him. Now the champions likely face their BIGGEST threats for the titles to date. Kaun and Toa Liona are two massive and fierce competitors under the regime of Prince Nana. When we add ‘The Machine’ Brian Cage into the mix, it is hard to bet against this trio.

One of the most notable qualities of Cage and the Gates of Agony is that despite being incredibly strong that they are incredibly agile. Their speed and the impact to which they can connect doesn’t bode well for The Boys. Can the champions who are physically outmatched have the ability to overcome the challenge of Prince Nana’s trio of terror?

Until recently, by Tony Khan, it was revealed that Mercedes Martinez was injured. While it may have been mentioned in passing, it received little to no attention, unlike the situation with the AEW Women’s World Championship. That said, there has been little attention to the Women’s title, which is unfortunate.

This match and these two women have all the potential of putting on a special matchup between them. When we consider the recent character change by Athena and what appears to be a push towards this title, one has to wonder if she may be the one to dethrone Mercedes for the ROH Women’s Championship.

On a recent edition of AEW television, a man from Keith Lee’s past came front and center in hopes of getting an explanation for why he left him behind. Shane Taylor and Keith Lee worked together for years and in doing so developed a team that was both physically imposing and had all the potential to be champions for years to come.

But with Lee wanting other things, he and Lee went their separate ways. In his split from Shane Taylor, Keith Lee became a highly sought-after and in-demand talent on the independent circuit. But after years of earning respect in Ring of Honor, Shane Taylor build his own empire and, in the process, captured ROH gold of his own.

Will this be the night, Swerve in Our Glory goes their separate ways? This isn’t Strickland’s fight, so one has to wonder if his memory of what happened in their AEW World Tag Title match.

Robinson’s challenge for the title brings with it his return of sorts to Ring of Honor as well. Fans will recall Robinson, and then partner David Finlay would compete in the promotion. The duo also competed in IMPACT! but primarily spent their time competing for New Japan. Both men have a history with Japan and those that fought there.

A question that could surface here is does a former AEW champion make himself seen during this match? Joe defeated Wardlow for the TNT Championship when he choked out Powerhouse Hobbs in a triple threat. Does Wardlow cost him the TV championship against Juice? Tune in Saturday to find out.

As evident this past week on AEW Dynamite, these two teams will face each for the third time. This time around, while the stakes are the same, what isn’t is same is how the winners will have to capture the titles. A double dog collar match is so rare but with the sheer brutality that should come about from this match, it is a wonder if the winners of this match aren’t really the losers.

Fans of the Briscoes are likely happy to see Dem Boys on screen. They are also anticipating that this match will finally be the one where Mark and Jay Briscoe gain a modicum of revenge in this third match-up between them.  Both matches were heralded this past year, and with each match brought even greater acclaim from those watching.

This time around, the match may be more of a fight than FTR are likely prepared for. Or so we are to believe? Tune in to what could easily be the main event of the night on Saturday.

Has there been a match where the trade-off could honestly be a case of feast or famine? As many are aware, a win by Castagnoli would make him a two-time ROH Champion. But if Castagnoli loses, he must join the Jericho Appreciation Society. If Castagnoli does lose, he will once again be aligned with his former tag team partner Jake Hager.

But with a similar storyline taking place, Matt Hardy and The Firm to have it happen here seems unlikely. So do we see another former ROH Champion get involved here to aid Castagnoli in his attempt to capture the title? Castagnoli has made several allies, always making him a King of Wrestling.

Stay tuned to Pro Wrestling Post for this and additional stories from the wrestling world. Readers can rely on Pro Wrestling Post as their daily source for everything inside the squared circle. As a result, readers can expect daily news, history, and much more. Also, please visit Ring of Honor’s official website here for news and information on the promotion and upcoming events, and FITE TV’s official website to watch ROH Final Battle for International viewers. FITE+ currently boasts 1000+ hours of live action each year. $4.99 a month/$49.99 a year with 7-day Free Trial.