Melbourne City Wrestling is live at the Thornbury Theatre on Saturday, November 9th, 2019 as they present End Game. Hot off their massive event held in celebration of the companies 9th Anniversary Melbourne City Wrestling looks to continue to up the excitement level with a massive card to look forward to. The main event is going to be red hot with the MCW World Championship on the line. Some of the absolute biggest names in Australian wrestling will be on hand for End Game. Now it is time to take a look at the card that is set for MCW presents End Game.

If you are looking to suspend disbelief and get swept up in some top-notch wrestling action then the main event of MCW presents End Game will be right up your alley. Three competitors are going to go to war in an elimination-style match. SLEX the current champion has had a phenomenal year and recently reignited his old rivalry with Adam Brooks.

Adam Brooks would love to add to his decorated credentials by becoming the new MCW World Champion. Dowie James is faced with a very large task in order to come out victorious in this match. Not only having to defeat a former world champion but also having to defeat the current dominant champion.

Dowie James could end up alerting the entire world to his presence by overcoming the odds and walking away with the championship. SLEX is the real deal though and will tear the house down along with his two opponents in this exciting main event match.

Danny Psycho has found himself in the middle of a fairytale come back to Melbourne City Wrestling. He came back and went the distance in the MCW Intercommonwealth Championship tournament earlier this year. Danny has been holding on to his championship with honor and has welcomed any and all challengers.

Along comes Hartley Jackson making his action at the last show be his statement and claim a match with the MCW Intercommonwealth Champion. Now management have signed off on the defense of the MCW Intercommonwealth Championship at MCW presents End Game. Danny Psycho has got his work cut out for him as Hartley Jackson is tough as nails and ready to do anything he can in order to become the new champion.

Robbie Eagles vs Emman The Kid

Emman The Kid is a new face on the scene. The young wrestler had such an impressive debut match for MCW that it has caught the attention of Robbie Eagles.

Six months since Robbie Eagles had had a competitive match in Melbourne City Wrestling, he now returns to take on the young upstart at End Game. Robbie is starting to become well known through the wrestling community for his quick pace and high flying ring style.  Emman The Kid meanwhile, has youth and quickness to use. However, Robbie Eagles is a veteran in the ring and he will be looking to teach a lesson to Emman The Kid.

The experience alone for the up and coming Emman The Kid is worth its weight in gold here. Expect a very exciting encounter when these two competitors lock up. 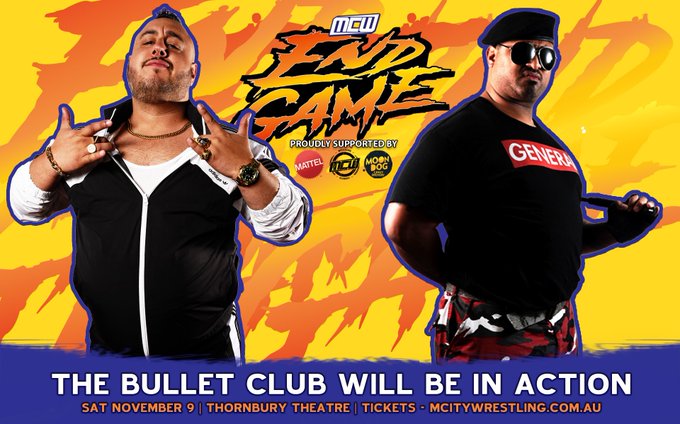 The famous faction known as The Bullet Club will be in action at MCW presents End Game.  The Rogue General and Mr. Gino Gambino will be gracing the ring for MCW presents End Game adding to the excitement level of the card.  Any time Mr. Gino Gambino shows up it tends to be quite the talking point of the entire evening, and fans should expect big things from the big man on this night.

Avary came up short in becoming the very first MCW Women’s Champion at MCW presents Nine. The tournament was a very memorable and historic event for the company. And now the women’s division is looking to make themselves noticed in order to stake a claim to a championship match.

Avary will look to pick up and a win and get herself on her way to the MCW Women’s Championship. Lena Kross will also want to make a statement here and come up with the victory.

Kross will have all eyes on her if she can come up with the victory over a very focused Avary. These two competitors will deliver a very competitive and athletic set of in-ring skills that will definitely leads to a memorable match.

Steph De Lander made history at MCW presents Nine when she became the winner of the MCW Women’s Championship tournament. While history was made, the target was immediately put on the back of Steph De Lander.

At MCW presents End Game, Steph De Lander will put her championship on the line against Kelly Anne. She is easily one of the strongest competitors that could be put up against the champion. These two women are going to tear the house down and prove just how much this championship will mean to them and to all of Australian wrestling as well.

Expect this to go down as a very memorable championship match no matter which of the two come out with the victory.

Three promised championship matches, the return of Robbie Eagles, Slex and Adam Brooks in the same match together. This is a strong card showcasing the depth of skill from the MCW roster. Expect a card from top to bottom full of fast-paced, hard-hitting, and absolutely passionate wrestling.

If you head on over to the MCW website and click MCW On Demand you can sign up to get access to all of the MCW events. The production values are unbelievable and in the in-ring action is well worth the time to invest in. So get signed up and you to will be able to get in the action with Melbourne City Wrestling.