On the upcoming NXT 2.0 for 4/19/22, three matches have been announced for the show. Of the matches included, a longstanding member of the Women’s roster competes for the first time on NXT 2.0 as Natalya debuts. The other two matches include a growing rivalry between Sarray and Tiffany Stratton and the former NXT North American Champion Carmelo Hayes facing the former NXT Cruiserweight Champion, Santos Escobar.

Fans will also likely to see the debut of former NXT UK talent Nathan Frazier. Also likely to appear on the card are the new NXT Tag Team Champions and former NXT UK champions, Pretty Deadly. Will Bron Breakker finally get his hands on Joe Gacy, and who steps up next to face Cameron Grimes for the NXT North American championship? Here is the NXT 2.0 for 4/19/22 preview.

On last week’s appearance on NXT 2.0, Natalya came in and did more than show up. In a confrontation with the former number one contender for the NXT Women’s title Cora Jade, Natayla made her mark. First, she would beat Jade down and then lock her into a sharpshooter. After leaving Jade in the ring to recover, Natalya would be confronted by Tatum Paxley in the dressing room area. That confrontation led to this match here tonight.

For Paxley, she continues to try and prove herself to Ivy Nile within the Diamond Mine. Without question, a win against Natalya would certainly earn Nile’s respect for her. Natalya has captured the Divas Championship, Women’s Championship and been a co-holder of the Women’s Tag team championship. Much like the appearances of AJ Styles, Dolph Ziggler, and the Mysterio’s before her, Natalya’s moment with the brand will only help to heighten its value.

Will Paxley be but a minor speedbump standing in Natalya’s way to a potential matchup for the NXT Women’s Title? 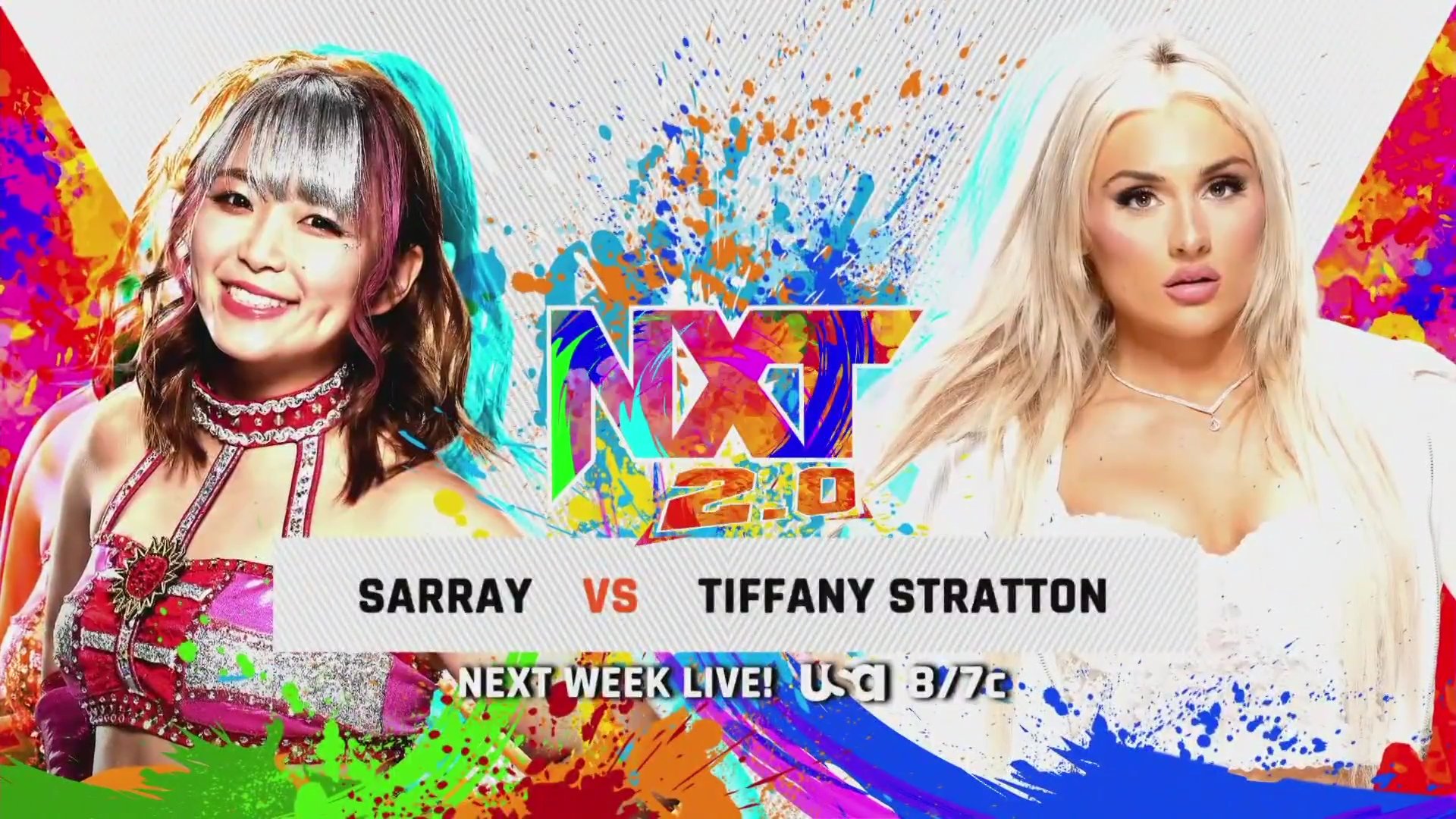 These two have exchanged words, had items stolen from them, and lost in nearly record fashion. Enough of the formalities between them. On this night, they need to put all the growing animosity and anger between them and fight. Sarray came into NXT with a pedigree behind her. It feels as though that heralded arrival has seemingly been lost during NXT’s rebranding.

For Stratton, she has been elevated since her arrival on the brand. Daddy’s girl has though proven to be more than simply the spoiled rich girl. She has shown fans how she’s incredibly athletic in the ring. Stratton’s athleticism combined with Sarray’s striking and innovation lends itself for an exciting matchup. One of the biggest questions about their match is will they be given time to showcase what they can do.

Fans will recall when they faced each other in the past, Stratton won in nearly record time. That match couldn’t have sat well for either woman, so the hope is that more emerges in this matchup. Will this be the match be their blowoff one between?

Two of NXT’s brightest and key members of the roster face off against one another for the first time. With both men capturing titles in either NXT or the new NXT 2.0, this match goes beyond simply a singles match. These two are slated to move up the ranks in the NXT single’s division. In doing so, they have to be considered threats for the NXT Championship.

While Bron Breakker is primed to deal with Joe Gacy and the mind games he is responsible for, Escobar and Hayes are likely the next in line to contend for that title. The biggest question going in is between them whom is more primed between the two of facing Bron Breakker next? While Escobar has been in NXT longer are his chances to capture the title less likely than Hayes?

Fans are well aware that both men can put on tremendous matches regardless of their place on the card.

Stay tuned to Pro Wrestling Post for this and additional stories from the wrestling world. Readers can rely on Pro Wrestling Post to be their daily source for everything inside the squared circle. As a result, readers can expect daily news, history, and more. Please visit WWE NXT’s official website here for information on the brand and upcoming events.