January has been a chaotic month for IMPACT Wrestling leading into IMPACT Wrestling No Surrender 2022. It seems like inmates are running the asylum, with Honor No More, W. Morrissey, and BULLET CLUB all beginning a campaign of destruction. This Saturday will see the culmination of this chaos as IMPACT Wrestling comes to the Alario Center in New Orleans for No Surrender.

W Morrissey will face Moose for the IMPACT World Championship, Guerillas of Destiny will face The Good Brothers for the Tag Team Championships, and Honor No More will fight for their very survival against 5 of IMPACT Wrestling’s finest in a hardcore war. But that’s not all. Here’s more of what you can expect this Saturday night on the IMPACT Plus app. 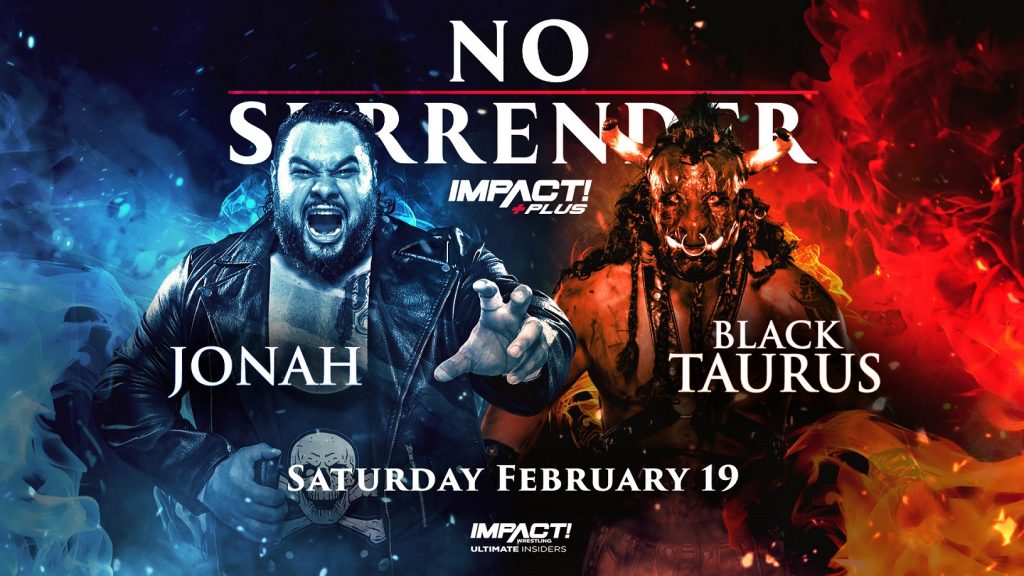 Following his loss to Josh Alexander at Hard To Kill, JONAH has been out to prove he’s still an unstoppable force. To this end, he’s brutalized his recent opponents, namely Raj Singh and Crazzy Steve. On February 3rd, JONAH took less than 3 minutes to demolish Crazzy Steve. Following the match, JONAH laid into the smallest member of DECAY. In response, Crazzy Steve’s tag team partner Black Taurus hit the ring, reminding JONAH to pick on somebody his own size. Now, these two powerhouses are set to collide this Saturday night at No Surrender. 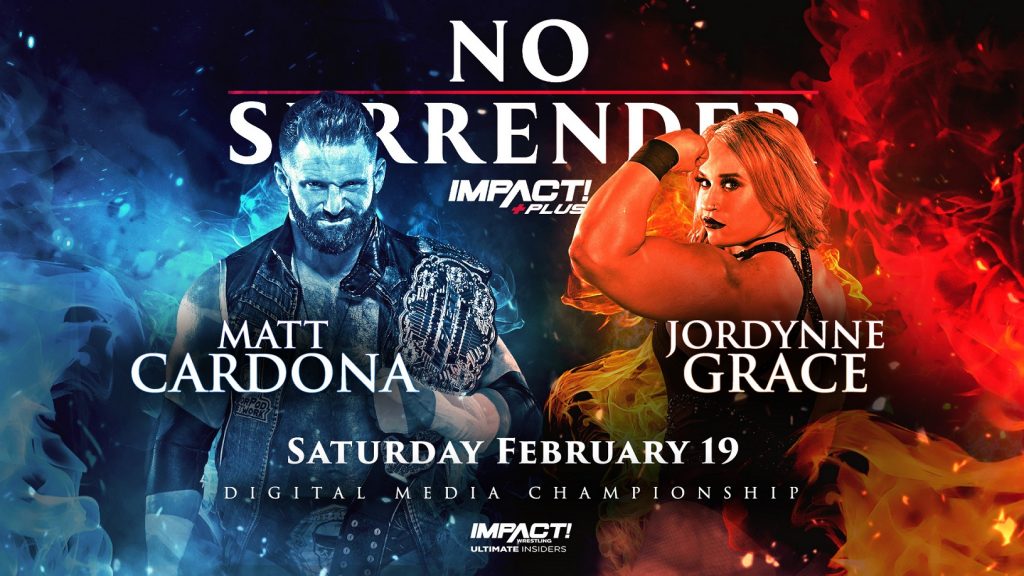 On February 3rd, Matt Cardona wrestled Jordynne Grace in her first televised defense of the IMPACT Digital Media Championship. It was in this match that we first saw the new side of Matt Cardona. Unable to drop Grace for the three count, Cardona caught her with a chair shot, knocking her dizzy while the referee wasn’t looking. He then followed up with his signature leg lariat to capture his first championship in IMPACT Wrestling.

In a recent interview with Gia Miller, Cardona explained his actions. Cardona believes he was “screwed” out of the IMPACT World Championship at Hard To Kill and that management doesn’t believe in him enough to grant him a rematch. What he needed was a change in attitude. Cardona chose to challenge for the Digital Media Championship because he sees himself as the progenitor of wrestlers with an outsized online presence. 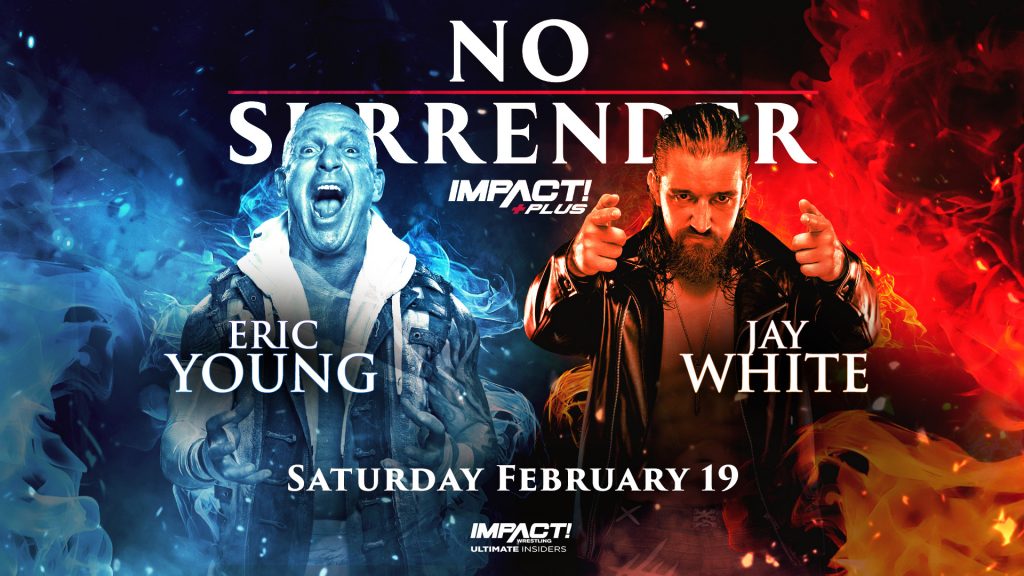 It’s been a long time coming, but BULLET CLUB has come to IMPACT Wrestling in full force. What started as Jay White naming a representative and sending emissaries has now become a full-scale invasion. “Switchblade” Jay White and the Guerillas of Destiny are here, and they’re intent on domination, just like they were in New Japan Pro Wrestling. However, BULLET CLUB isn’t the only faction seeking complete control of IMPACT Wrestling.

Back in 2020, Eric Young joined forces with Joe Doering and a disillusioned Cody Deaner to form Violent By Design. Since then, Young, Deaner, and Doering have demolished just about anyone in their way. This Saturday night, the leaders of BULLET Club and Violent By Design will determine who gets to go on with their plans to dominate IMPACT Wrestling. 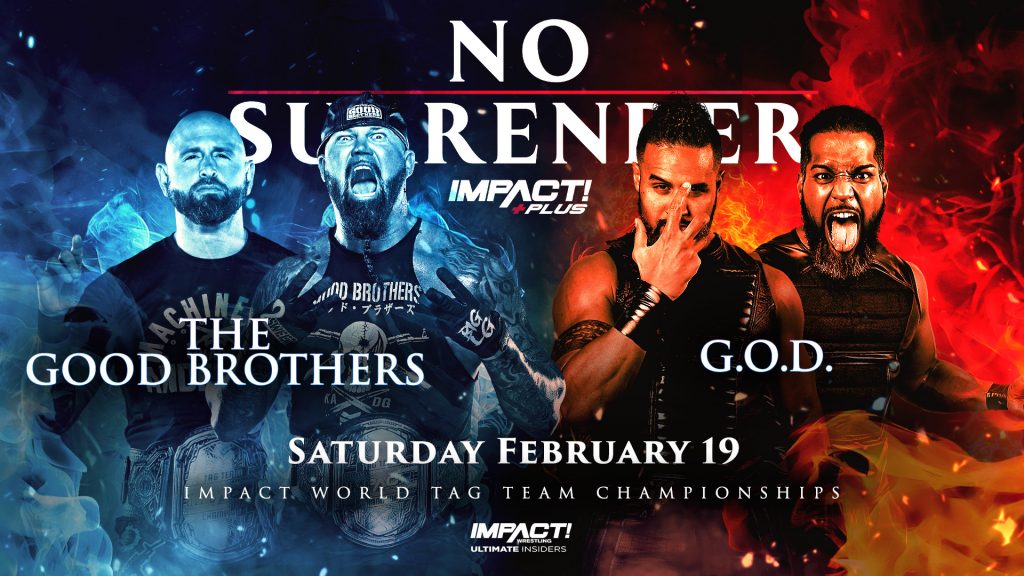 Speaking of BULLET CLUB, tensions between the renegade NJPW faction and their former allies Doc Gallows and Karl Anderson have been simmering since 2020. When WWE released Gallows and Anderson from their contracts, Tama Tonga said he’d be happy to welcome them back. However, since they signed with IMPACT Wrestling, Tama has become more and more critical of the BULLET CLUB founders.

On a 2021 episode of the Tama’s Island Podcast, Tama said, “Nobody gives a [expletive] about IMPACT.” That’s not even counting things Tama has said on his Twitter. IMPACT Executive VP Scott D’Amore even invited G.o.D to come hash out their differences in person. But it wasn’t until January 27th that Tama Tonga and Tanga Loa finally arrived in the IMPACT Zone. After they attacked Jake Something and Mike Bailey, Guerillas of Destiny spoke directly into the camera, saying they were coming to take the IMPACT World Tag Team Championships.

Later on that night, Gallows and Anderson agreed that they needed to put down the monster they created a decade ago. This Saturday night, Guerillas of Destiny face The Good Brothers for both the IMPACT World Tag Team Championships and the fate of BULLET CLUB. 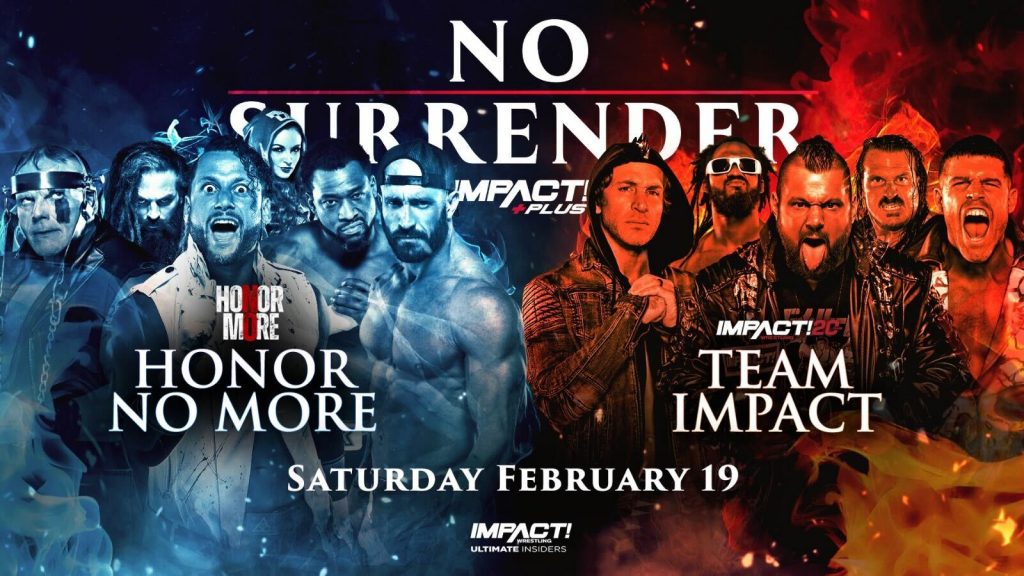 The group of former ROH renegades calling themselves Honor No More has been running roughshod over IMPACT Wrestling since they made their shocking debut at Hard To Kill. On January 20th, Matt Taven’s band of misfits bought tickets to the show, stating they wanted to support Jonathan Gresham in his ROH World Championship match against Steve Maclin. Later that night, they attacked Josh Alexander and Charlie Haas.

The following week, Scott D’Amore made the battle official, cutting a scathing promo on the Ex-ROH reprobates. He then announced that should Honor No More lose their 10-man Hardcore War at No Surrender; they must leave IMPACT Wrestling for good. Surely a team of IMPACT Wrestling’s finest would have no issue sending away a bunch of ne’er-do-wells like Matt Taven and company.

There’s just one hitch. Last week, Scott D’Amore suspended Josh Alexander over his recent violent outbursts. Later on, relative newcomer Steve Maclin asked to be recruited in The Walking Weapon’s absence. Will Maclin prove himself in such a high-stakes match, or will Matt Taven and Honor No More use this to their advantage? 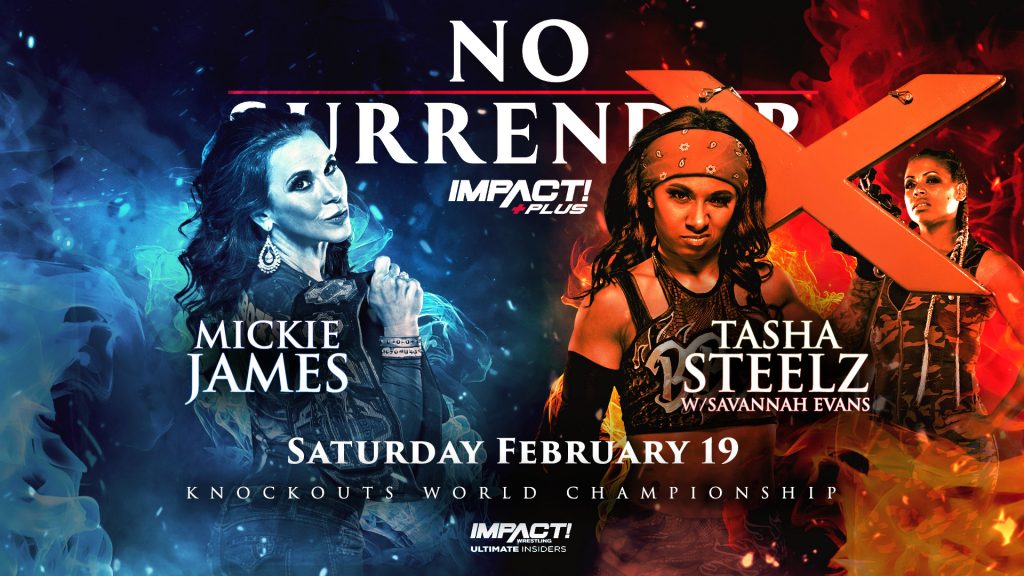 At Hard To Kill, Tasha Steelz made history by winning the first-ever all-female Ultimate X match. Having scurried across the ropes to snatch the X from Chelsea Green, Steelz became the new #1 Contender to Mickie James’ Knockouts Championship. Since then, Steelz has been incredibly antagonistic towards James and Green, interrupting interviews with trash talk while the intimidating Savannah Evans leers on.

On February 10th, “The Boricua Badass” threw a garbage can into the ring during a non-title match between Mickie James and Chelsea Green. Evans then yanked Green’s leg out from under her, causing her to crash to the mat and ending the match just as it got started. At No Surrender, Mickie James defends the Knockouts Championship against Tasha Steelz. But will Chelsea Green be there to even the odds against Savannah Evans? Find out live this Saturday night on the IMPACT Plus app. 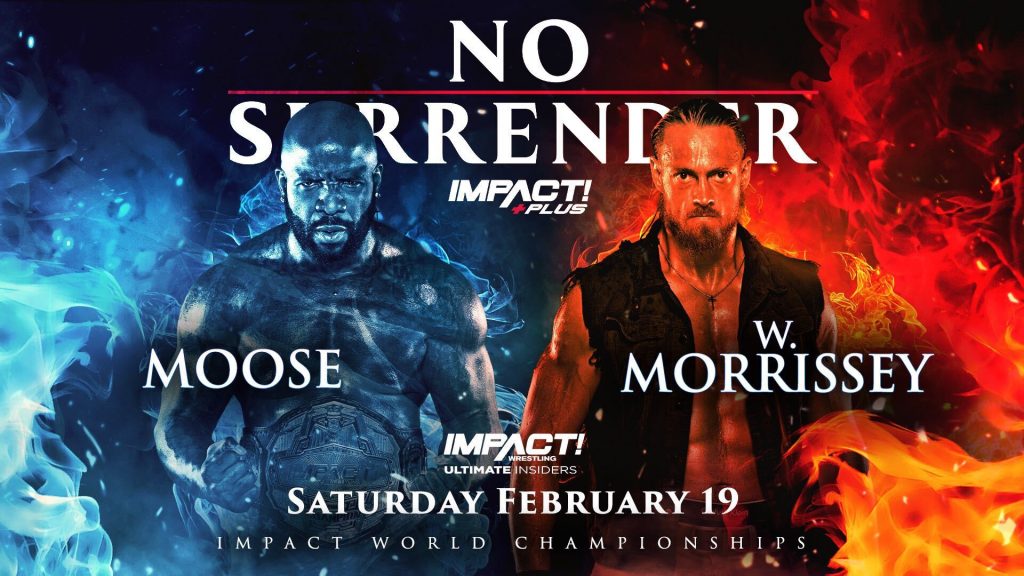 At Hard to Kill, W. Morrissey planted IMPACT World Champion Moose with a powerbomb that should have scored him a 3 count victory. Unfortunately, the referee wasn’t present to count the pin. When Moose recovered, he immediately went on a tear, taking out Chelsea Green, the second referee, and finally Matt Cardona to walk away with the title.

The following week, Morrissey demanded a singles rematch against “The Wrestling God” and began his path of destruction, attacking just about anyone backstage. In an attempt to bring an end to the chaos, Scott D’Amore granted Morrissey his rematch for the main event of No Surrender. The unstoppable force meets the immovable object this Saturday night in New Orleans, live on IMPACT Plus.

Stay tuned to Pro Wrestling Post for this and additional stories from the wrestling world. Readers can rely on Pro Wrestling Post to be their daily source for all things inside the squared circle. As a result, readers can expect daily news, history, and so much more. Please visit IMPACT Wrestling’s website here for news and information on the promotion and upcoming events.