As we review IMPACT with After the IMPACT for 10/06/22, this is the go-home episode of IMPACT before their biggest show of the year, Bound For Glory. We got the #1 Contender to the X Division Title, Frankie Kazarian, facing off against Honor No More’s Kenny King. Mia Yim looking to have some momentum before her match at BFG, as she goes 1 on 1 with Gisele Shaw.

Kicking off this week’s IMPACT with a tribute graphic remembering Antonio Inoki.

After the IMPACT for 10/06/22
Frankie Kazarian vs. Kenny King

Frankie Kazarian & Kenny King lock up to get this match started, but Kazarian leans King in the corner for a rope break. Kazarian gets King in a side headlock, but they had a stalemate. Kazarian hit a shoulder tackle, an arm drag, and tried to lock in the Chicken Wing on King, but Kenny King powers out.

Kazarian & King exchanged wrist locks before King hit a vertical arm drag but Kazarian got up and hit a hip toss on Kazarian. King & Kazarian exchange pinfalls before Kazarian hits a head kick, an elbow strike, and a discus lariat on King. Kazarian goes for a leaping lariat on King, but King evaded and hit a shotgun dropkick on Kazarian in the face. King hits a twisting crossbody on Kazarian to the outside.

There was a video package promoting the X Division Title Match between Frankie Kazarian & X Division Champion Mike Bailey ahead of their match at Bound For Glory.

Next, there was a pre recorded promo from Eddie Edwards ahead of his match against Impact World Champion Josh Alexander. Edwards recalled his accolades, including winning Pro Wrestling NOAH’s GHC Heavyweight Title, X Division Title, Impact World Tag Team Titles & Impact World Title to say that he will remind everyone who he is at Bound For Glory.

X Division Champion Mike Bailey cut a pre-recorded promo ahead of his title defense against Frankie Kazarian at Bound For Glory. Bailey said that Kazarian was once the future & present, but his legacy will become the past when he beats him at Bound For Glory.

Mia Yim hits 3 arm drags, a hip toss, a helluva kick, and a hurricanrana on Gisele Shaw to start the match, sending Shaw to the outside. Shaw hits a springboard spinning crossbody on Yim to the outside. After talking trash to James outside, Yim greets Shaw back in the ring with 3 near falls on her before locking in a Guillotine Choke.

Shaw sends Yim into the corner before kicking her in the back of the head. Shaw hits a Draping DDT on Yim for a near fall. Shaw & Yim exchange strikes before Shaw hits a spinning kick on Yim, but Yim hits a headbutt on Shaw before they collapse onto the mat.

Yim & Shaw exchange strikes before Yim hits 3 forearm strikes, a lariat, a thrust kick, a dropkick, a shotgun dropkick onto the corner, and a cannonball on Shaw for a rope-break near fall. Shaw tosses Yim onto the bottom rope. Shaw hits a backbreaker/flatliner combo on Yim for a near fall. Shaw went for a pump kick, but Yim evaded and hits a Eat Defeat to score the victory.

After the match, Mickie James confronts Mia Yim in the ring.

Next, we get a video package narrating the rules for the Call Your Shot Gauntlet happening at Bound For Glory.

During a vignette by Killer Kelly, Tasha Steelz & Savannah Evans attack Killer Kelly from behind. Steelz, Evans & Kelly are all going to be a part of the Call Your Shot Gauntlet at Bound For Glory.

Backstage we see the Digital Media Champion Brian Myers confronted before a random big guy in a Yellow Hoodie confronted them by shouting “I AM VIOLENCE! I AM VIOLENCE!”. Myers is also confronted by Delirious backstage and a woman he claimed to be “Mantaur’s agent” before he told her to tell Black Taurus & Crazzy Steve to inform them that they would be embarrassed by the most professional wrestler.

Then, there was a video package narrating the feud of Masha Slamovich & Knockouts Champion Jordynne Grace ahead of their match at Bound For Glory for the Knockouts Title.

The match starts off with Moose & Maclin exchanging punches before Moose hits a shoulder tackle on Maclin. Maclin hits a double-leg takedown on Moose before laying in the punches. Callihan gets to the count of five on the rope break, but he said f*ck it keep going, and Maclin obliged and continues to lay in the chops on Moose.

Maclin lowers the top rope to send Moose outside. Maclin hits a tope suicida on Moose busting his forehead open. Callihan starts counting the outside count, before deciding to sit on the apron and shout “wrestling” as the two brawled. Moose hits a snap suplex on Maclin, to which Callihan reacted by asking Maclin Are you okay?!.

Back in the ring, Moose Irish Whips Maclin to the corner. Moose lays in his knee on Maclin in the corner. Maclin hits an overhead chop on Moose before running the ropes, but Moose catches Maclin with a running elbow strike, which Callihan responded with Good Job!.

Maclin & Moose exchange strikes before Maclin hit a forearm strike and an upside-down corner spear on Moose for the delayed near fall, thanks to Callihan being hooked at the impact from Maclin. Maclin gets to the middle turnbuckle, but Moose catches him with the Sky High, but the referee did not see what happened.

Moose goes for a spear, but Maclin tosses him into the middle turnbuckle. Moose hits a wicked spear on Maclin for a near fall before Callihan stomps Moose on the head. Callihan hits piledrivers on Moose & Maclin before he places Maclin over Moose for the victory. 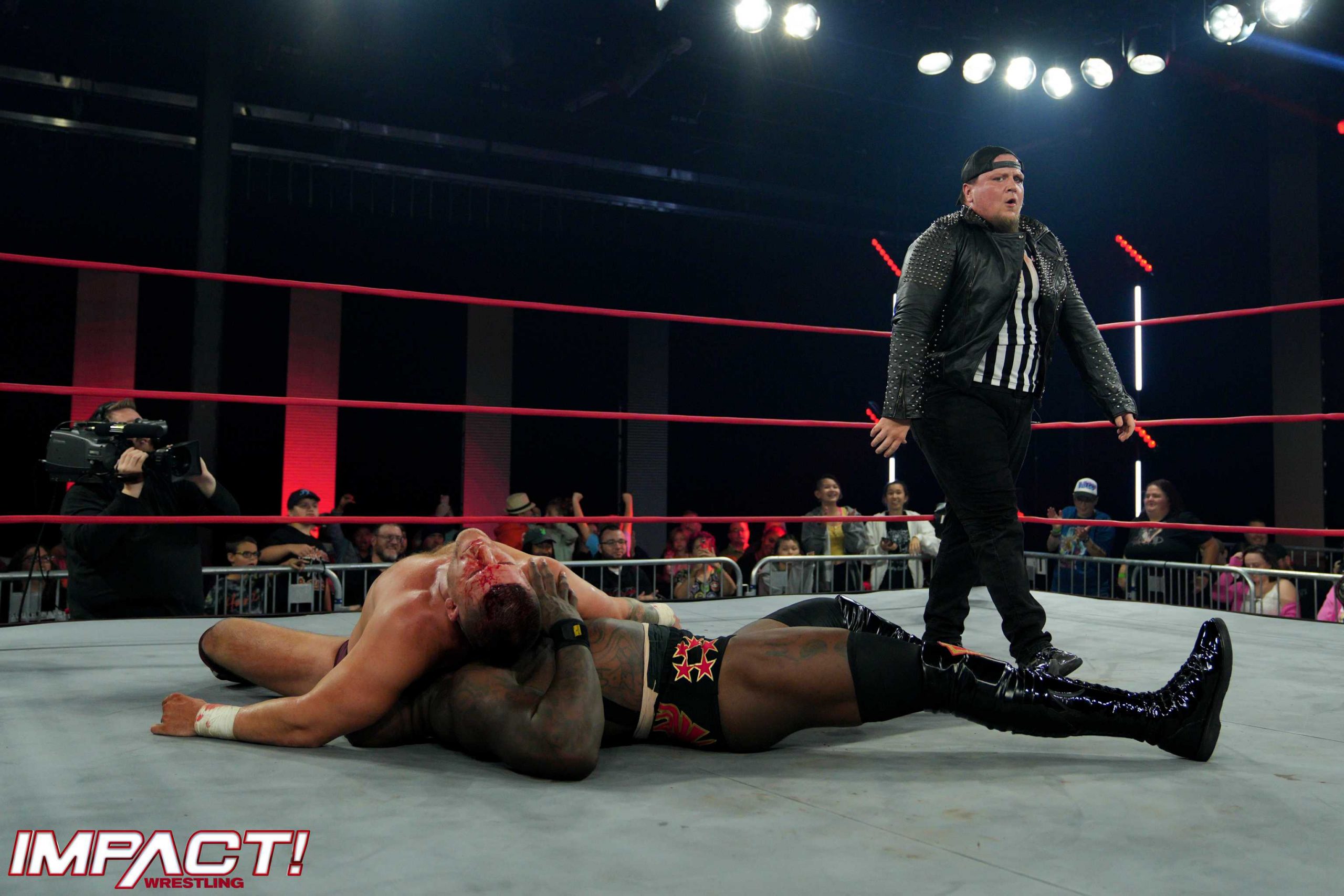 After the IMPACT for 10/06/22
Tag Team Match
Death Dollz vs. Swinger’s Swingerellas

Backstage Gia Miller is with the Knockouts Tag Team Champions, VXT for an interview with Deonna Purrazzo, saying that Death Dollz’s performance was repulsive. Chelsea Green said that they will leave everyone on the crowd would be VXTed.

Alex Shelley hits an overhead chop on Matt Taven to which Taven reacts by laying the strikes on Shelley on the corner. Taven goes for the Climax but Shelley reverses it with a Fujiwara armbar before Taven rolls out of the ring. Shelley gets Taven in a headlock before breaking the hold and hitting a shoulder tackle & a kick to the back.

Taven accidentally hits a sliding dropkick on Bennett before Shelley hits a snapmare Penalty Kick on Taven on ringside. Taven gauges Shelley’s eyes before hitting two backbreakers on Shelley for a near fall that sends us to a break.

After the commercial break, Taven hits a twisting backbreaker on Shelley for a near fall. Taven hits a side Russian leg sweep on Shelley before attempting the lionsault on Shelley, but Shelley evades. Shelley hits a knee strike, a 2nd PK Kick, and a crucifix on Taven for a 2 count.

Shelley hits 3 ripcord chops & an arm snapper on Taven, but Taven responds with a twisting leg lariat and a Lionsault on Shelley for a near fall. Taven goes for a springboard enziguri kick, but Shelley evades it, and hits a flatliner on Taven onto the middle turnbuckle followed by a Tornado DDT. Shelley hits a superkick and a Sliced Bread on Taven for a rope-break near fall, thanks to Maria placing Taven’s foot on the rope.

Taven hits a springboard enziguri kick on Shelley and attempts a top rope frog splash, but Shelley lifts his knees and gets a near fall on Taven. After a distraction from Bennett & Kanellis, Taven gets a roll-up on Shelley followed by a running knee strike for a 2.9 count. Shelley counters Taven’s attempt at The Climax to hit the Shell Shock for the victory.

During an Exclusive Impact Interview with Tom Hannifan, Impact World Champion Josh Alexander said that they will show who is the heart & soul of Impact Wrestling. Eddie Edwards confronts Alexander after the interview but was confronted by his wife Alisha. Alisha Edwards told Edwards that either his actions come to an end or their relationship does.

In the ring, we see the IMPACT Wrestling Executive Vice President Scott D’Amore hosting the contract signing to make the Knockouts Title Match between the #1 Contender Masha Slamovich & the current Knockouts Champion, Jordynne Grace. Masha Slamovich utters no words before signing her part of the contract.

Grace, in contrast, tells Slamovich that she respects her for making her goal very clear by taking everyone down to get the gold, but told her that she was nowhere near ready to give up her title. Grace points out that she is the 1st ever triple crown champion in IMPACT History before telling Slamovich she’ll have to learn grace from defeat.

Grace signed the contract. Slamovich says something in Russian, which befuddled Grace as she asked Slamovich to repeat her statement. Slamovich tells Grace that Masha is Gonna Kill You. Masha tosses the contract table over Grace and places it sideways on the corner. Grace fights back and nearly hits the Muscle Buster on Masha onto the table, but Slamovich escapes the move and hits a back fist on Grace.

Slamovich then hits the Snowplow on Grace onto the table. Masha Slamovich, with the Knockouts Title in hand to close out this week’s episode of Impact.

20-Person Call Your Shot Gauntlet Match
PCO vs. Rich Swann vs. Gisele Shaw vs. Heath vs. Bhupinder Gujjar vs. Bobby Fish vs. Steve Maclin vs. Moose vs. Sami Callihan vs. Johnny Swinger vs. Killer Kelly vs. Tasha Steelz vs. Savannah Evans vs. Joe Hendry vs. Eric Young vs. 5 More TBD

Please share with us what you thought of this week’s edition of IMPACT! Wrestling and what you anticipate happening at Bound for Glory in the comment section below.

Stay tuned to Pro Wrestling Post for this and additional stories from the wrestling world. Readers can rely on Pro Wrestling Post to be their daily source for all things inside the squared circle. As a result, readers can expect daily news, history, and much more. Please visit IMPACT! Wrestling’s site here for news and information on the promotion and upcoming events pertaining to IMPACT, including Bound for Glory are available on IMPACT+ and  FITE TV’s official website.