This isn’t a mistake; yes, you’re reading the latest of AEW Dynamite IGNITE for 7/13/22 correctly. On behalf of Brandon Lasher, this week’s preview will be covered by myself. With Fyter Fest taking place once again, the annual event will have a series of exciting match-ups along with a couple of advertised promos as well. The program has some matches that pit rising talent against more notable ones.

We will be witness to three championship matches along with ones that appear to be furthering animosity amongst factions. 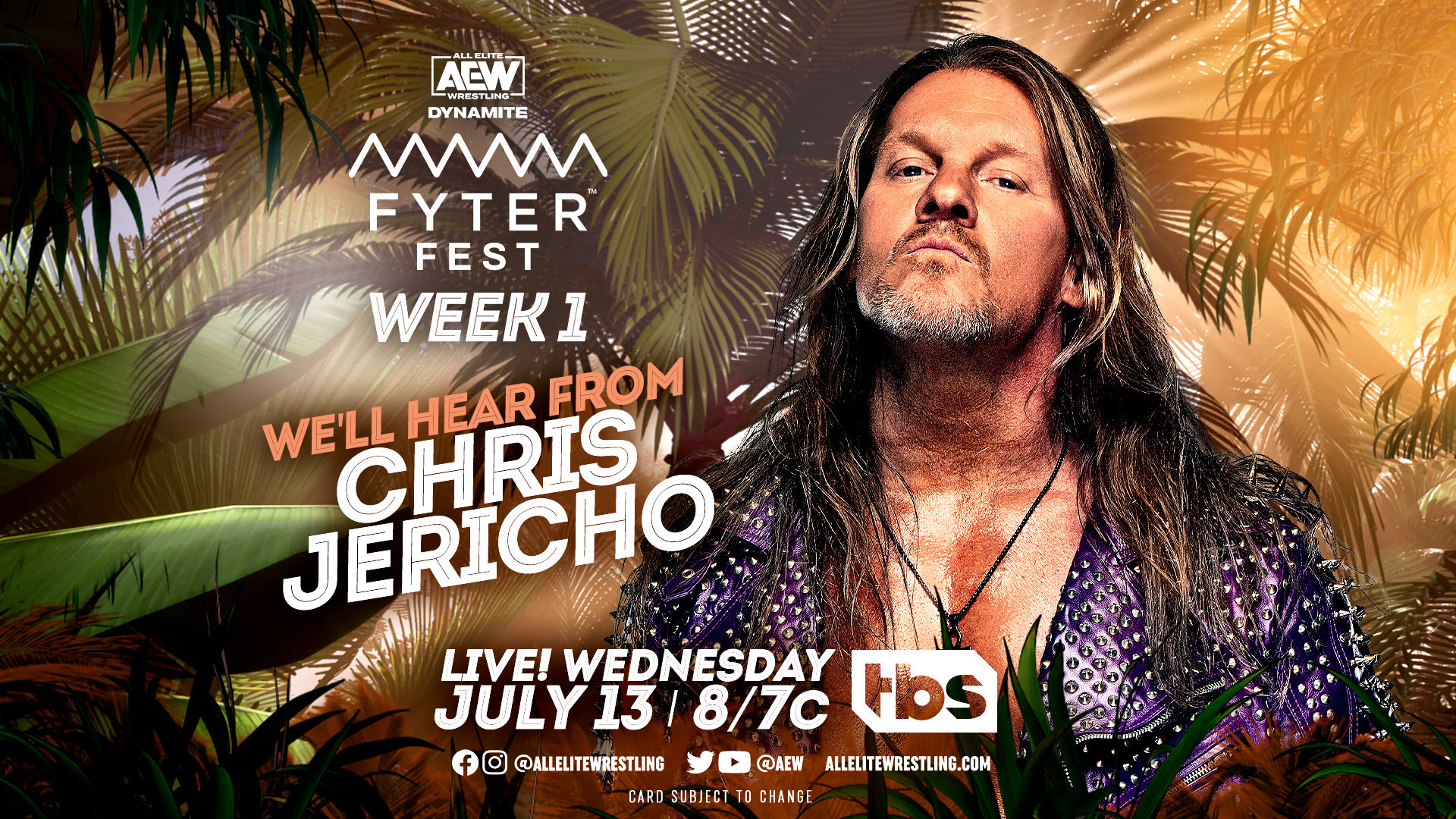 A week before his barbed wire death match against Eddie Kingston, Chris Jericho will address what is still coming for him. Jericho’s feud with Eddie Kingston has been such a poignant and meaningful rivalry that has helped to elevate Eddie Kingston in the process. Despite being a veteran for as long as he has, Kingston is in a meaningful feud that has seen him put in a position where he is coming for blood.

The caveat is that the Jericho Appreciation Society is to be suspended above the ring in a shark tank screams something out of the days of Mid-Atlantic or Georgia Championship Wrestling and is something old that is being brought back again. 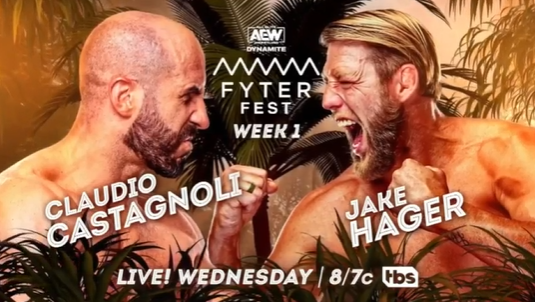 After Blood and Guts came and went, it isn’t to say all things have come to an end between the Blackpool Combat Club and the Jericho Appreciation Society. This is evident as BCC’s latest addition, Castagnoli, faces Hager. It should be an intense and fierce battle as Castagnoli’s deceptive strength will be a nice compliment in facing the MMA background of Hager. The question isn’t if but how many times Hager will be swung around by Castagnoli. 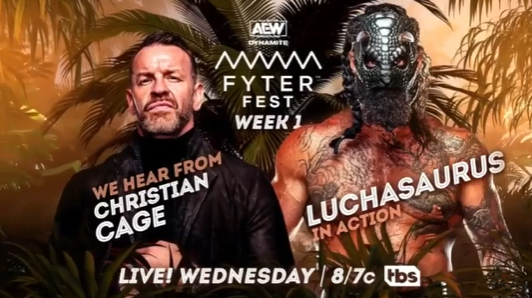 We Hear From Christian Cage, and Luchasaurus is in Action

Cage continues to be the driving force behind the monster that is Luchasaurus. With Jungle Boy absent, it is only a matter of time before he returns. However, Matt Hardy came out in defense of Jungle Boy and ultimately paid for it. Matt is now a singles competitor, but in doing so, he has appeared to rekindle an old rivalry with Cage.

With Christian Cage sparing now expense at cutting down everything that meant something about Jungle Boy, who else will step up and address Cage and Luchasaurus in his absence? 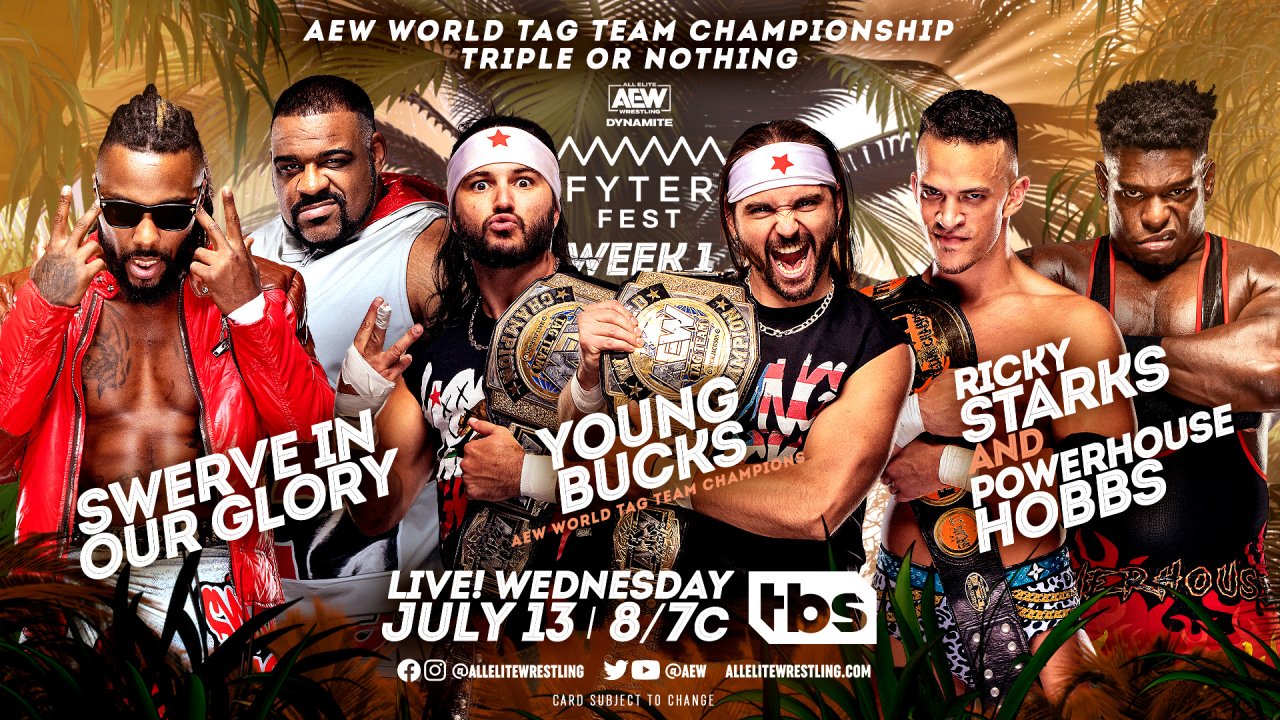 AEW Dynamite IGNITE for 7/13/22
AEW World Tag Team Championship Triple or Nothing
Swerve in Our Glory vs. The Young Bucks (c) vs. Ricky Starks and Powerhouse Hobbs

With Matt and Nick Jackson once again in the driver’s seats as champions, they have the unenviable task of facing challenges from all comers. Swerve Strickland and Keith Lee, along with Starks and Hobbs, could easily lay claim to the titles. The question is can the Bucks retain against two teams with a much more significant and stronger threat on their side. Their challengers will not be easy one.

Will the rest of the Undisputed Elite present themselves in this match-up?

A match of this caliber can only benefit both women. However, Deeb, who is on a collision course to face Mercedes Martinez for the ROH Women’s Championship, will be tough against the Dark Order’s Anna Jay. Since returning from her injury, Anna Jay has been in a bit of limbo. While she and ‘friend’ Tay Conti had a short rivalry with Penelope Ford and The Bunny, the question is, what has happened for her since?

Jay has had a great deal of hype around her, but a lack of on-screen time on her own or with the rest of Dark Order has made many question where she stands. A match against Deeb will only help to make Jay better, even if it’s in defeat.

What a contrast in styles? Fans have come to expect the master of the powerbomb symphony to wipe out his competition. However, a match against Orange Cassidy will force him to work outside his style a bit in order to keep up with him. For everyone Cassidy has faced throughout his career, a championship match here is as much a thank you for his commitment in his return to the ring since his injury that one he’s deserved.

Will Wardlow be forced to hit his symphony of powerbomb, or will he have to do his best to avoid an Orange Punch?

Do readers recall our comment earlier about the fast-rising talent on the card? Could any star be rising faster than that of Takeshita? Whether in a win or in defeat, Takeshita has managed to make the most of his opportunities, even if they may be in loss. Will this be just another example of Takeshita being granted an opportunity? Or can this match be more than Moxley had bargained for?

Fans should be as afraid of Takeshita as anyone in this match because he may be walking into a game, and the champion is likely walking into war.

Stay tuned to Pro Wrestling Post for this and additional stories from the wrestling world. Readers can rely on Pro Wrestling Post as their daily source for everything inside the squared circle. As a result, readers can expect daily news, history, and so much more. Also, please visit All Elite Wrestling’s official website here for news and information on the promotion and upcoming events and FITE TV’s official website to watch AEW Dynamite and Rampage for International viewers.