AEW Dynamite will be filled with some interesting matches and moments this week as we preview AEW Dynamite IGNITE for 11/30/22. We will have the third match in the World Trios Championship Best of 7 Series. Also, we will hear from the new AEW World Champion. And we will see a possible instant classic between two of the best wrestlers in the world. Let us find out more about this interesting show in Indianapolis in the latest edition of AEW Ignite.

“The Devil” is finally back on AEW Dynamite! For the first time since winning the AEW World Championship at AEW Full Gear, he will speak in front of an AEW audience. MJF promised to win the World title the “right” way and then proceeded to use William Regal’s help to cheat his way to victory. What will MJF have to say this Wednesday night? It will certainly be memorable as always.

The Elite did themselves no favors with the crowd in Chicago last Wednesday. They seemed to be making fun of Chicago’s favorite wrestler last week. While they were having their fun angering the crowd, they lost a second straight match in the series for the AEW World Trios Championship.

Match Three will take place on Wednesday night. Can the Elite turn it around? Death Triangle is clearly not above cheating to win this series. We will see if the Elite can overcome the underhanded antics and finally win a trios match.

At AEW Full Gear, Jade Cargill finally reclaimed her TBS Championship belt back from Nyla Rose. She proceeded to get into an altercation with Bow Wow last week. They had been feuding on Twitter for months now.

This Wednesday night, Jade Cargill will hold a celebration for her TBS Championship. What will the celebration entail? Will we learn of a new challenger to her title? And will Bow Wow show up to continue their unique feud? So many questions to answer.

It is a unique match-up in the improving AEW Women’s Division. Anna Jay A.S. has certainly shown a vicious side since joining the Jericho Appreciation Society. She is looking for a big victory on AEW Dynamite to jump up in the division.

Willow Nightingale has been a popular figure since joining the company in 2021. She officially signed with the company on a recent AEW Rampage. Can she pull off the biggest win of her career? A match between two young stars of the AEW Women’s Division looking for a breakthrough win will certainly be fun to watch. 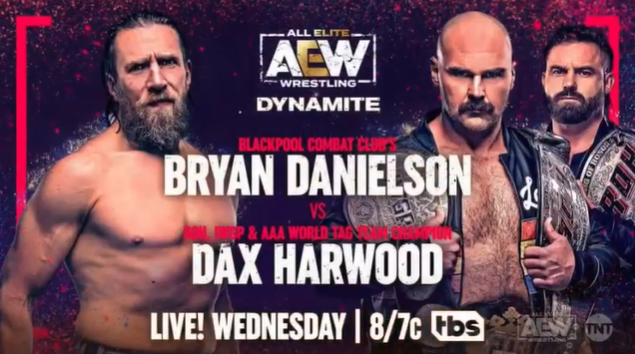 This could be a special match-up. Dax Harwood has been involved in many great singles matches in 2022. He is looking to end the year in wonderful fashion with a match with one of the greatest wrestlers in the world, Bryan Danielson.

While FTR holdw three Tag Team titles, the Blackpool Combat Club is in turmoil in the wake of AEW Full Gear. Will a distracted Danielson be able to focus on a motivated Dax Harwood? If he does we could be in for one of the best matches of the entire year in All Elite Wrestling. Fingers crossed for another wonderful AEW Dynamite.

Stay tuned to Pro Wrestling Post for this and additional stories from the wrestling world. Readers can rely on Pro Wrestling Post as their daily source for everything inside the squared circle. As a result, readers can expect daily news, history, and much more. Also, please visit All Elite Wrestling’s official website here for news and information on the promotion and upcoming events, and FITE TV’s official website to watch AEW Dynamite and Rampage for International viewers. FITE+ currently boasts 1000+ hours of live action each year. $4.99 a month/$49.99 a year with 7-day Free Trial.